Oh, To Be In England In Spring

Me and Norbert Slowgrove decided training would take the form of a run, as opposed to the usual walk. This was due to the poxy weather. With rain and cold winds forecast we thought it best to have a quick hour and a half run, rather than spend four or five hours walking in the miserable weather.

Norbert got out of his car, resplendent in turquoise top and three quarter length lycra leggings. I, on the other hand, chose a fluorescent orange zip up jacket and full length black lycra leggings, with matching peaked beanie hat. I have to say we looked fanfeckingtastic. No full body photos though, as this would drive any women reading the blog wild and they'd forever look on their other halves as totally inadequate in comparison.

We decided to attempt the mighty "Manningtree Four Peaks".......what do you mean, you've never heard of them ? Starting near The Thorn in Mistley, we headed up the hill towards Wrabness, before coming back towards Lawford, up and down the hills. Halfway up the second hill Ruddski appeared out of nowhere in the support team Skoda offering words of wisdom, which were obviously ignored. 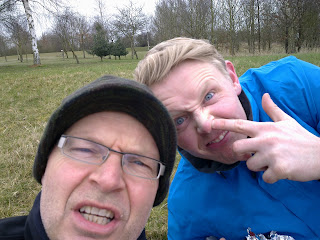 After about four miles we started up the main hill into Manningtree, a real killer and when it was just about starting to flatten off I heard Norbert shout "Stop! Stop!". I turned round and he was walking the last part of the hill. Dear reader, you will never know how much pleasure this gave me, the newly fit and ultra svelte 31 year old Jamie Slowgrove begging the 48 year old to stop because we was out of breath.

We continued around the lanes for another half our or so before ending back where we started, a good run of around seven miles.

This week we were meant to be in Yorkshire for a training session. Unfortunately, the ridiculous weather put paid to this and we called it off, to be re arranged sometime in April.

With The Silent Assassin due to be running a half marathon in Brentwood and no word from Norbert I set out by myself on Sunday morning for a hike wrapped up as if I was heading for the Arctic rather than north Essex. 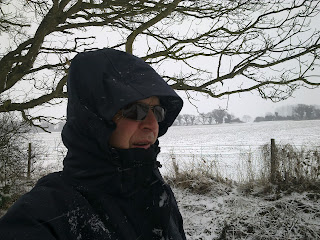 Starting from Thorrington, I headed towards Frating, through Bluegates Farm into Alresford, through Cockaynes wood, onto Wivenhoe, Essex University, along the river back into Wivenhoe (yes, I know it's boring......imagine what it's like having to write this nonsense every week, for God's sake). 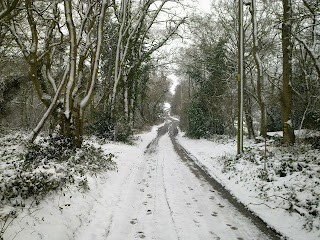 Some pictures of snow 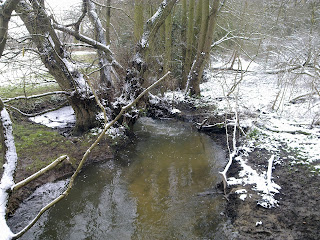 A quick coffee and a snack (a slice of date crumble since you ask) before continuing along the river to Alresford creek, Tenpenny farm and back home. Despite the sub zero temperature and 30 mph easterly winds an enjoyable walk. No, really.
Posted by The Essex Scribbler at 11:49 No comments:

Never Judge A Book By It's Cover

This weekend I was left to train by myself, as Norbert Slowgrove was on a weekend Stag "do" in Skegness, The Silent Assassin was otherwise engaged and The Manc Midgit was bed ridden with man flu (makes a change from sofa ridden with a bad knee).

With the weather being so miserable I decided on a run rather than a walk and did a big (for me) circuit around Great Bromley / Burnt Heath / Lawford / Manningtree / Little Bromley. A bitterly cold, dull day with nothing much to report, so on to more interesting matters.

Strolling Bones Team Manager Andy Rudd gave me a lift in his new Jaguar XKR sports car at the weekend. He pulled up dressed in his Hugo Boss suit and drove me around the lanes overlooking the Stour Estuary, until we came to a huge house on the outskirts of Mistley. We waited at the electric gates which slowly opened, whereupon Ruddski drove slowly up the long shingle drive, stopping only to say hello to his gardener. I was given a quick tour of the house before being told to leave (he'd caught me with some of the family silver in my pockets). 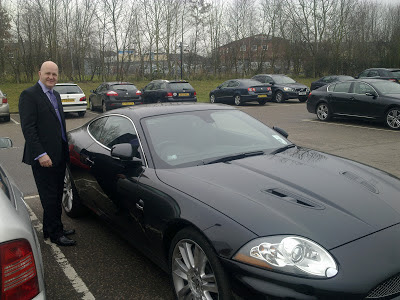 So, never judge a book by it's cover. Just because Ruddski turns up at work in his tatty old Skoda, dressed in a hideous yellow tank top and his Manningtree Comprehensive School (circa 1976) trousers, it doesn't mean he hasn't got a pot to piss in.
Posted by The Essex Scribbler at 11:27 No comments:

Me and Norbert Slowgrove met in Stratford St Mary at 9 on Saturday morning. Parked up in a layby, we were just about to make a start when two shady looking characters started eyeing Norbert's Audi TT (or it could have been my sexy Insignia Estate), so we moved up and parked in the village.

Norbert had been on a spend up and got out a brand new ruck sack and sky blue Berghaus jacket. It would have looked better if he'd taken the price tags off, but I thought it best not to mention it. From what I could make out the ticket said it was a "second" and was reduced from £99.99 to £29.99. Bargain. The man loves a deal.

We set off in the direction of Langham, down to the waterworks, up and down a few hills, then past Boxted Mill, and on to Thorington Street, where we had a quick stop for a bite to eat. I tucked into smoked salmon, cream cheese and caper bagels. I was apparently a "pretentious tosser", whilst Norbert had to make do with plastic bread and value chicken. 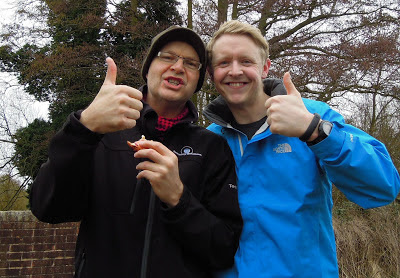 After the welcome stop it was up a long steep hill to Withermarsh Green, Shelly, Rayden, Higham and then back to Stratford. 16.5 miles in exactly four hours, brisk walking with a bit of jogging mixed in.

We await news from Manchester as to whether The Manc Midgit's ankle held up this weekend. Hope so, we don't want another one dropping out
Posted by The Essex Scribbler at 11:11 No comments: