"What's money? A man is a success if he gets up and goes to bed at night and in between does what he wants"

Hail His Bobness . Did I ever mention that he shares a birthday with me ? We're birds of a feather, me and Bob.

I've hardly been bassing this year. Lots of small fish ( too small for the nets ) and not much else of any size. Very, very poor.

Sunday I decided to give it a quick go, as it was a glorious morning. I walked down the stony track, across the mudflats and onto the bar and looked at the water. Clearish, but colouring up quickly, due to a freshening easterly wind. Not brilliant. 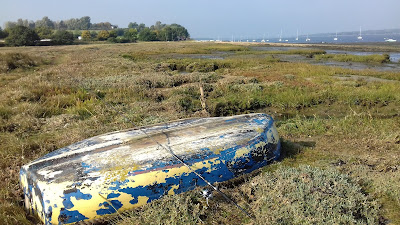 I'd been fishing without success for about twenty minutes when I changed lures. First cast and the water erupted as a schoolie crashed into the popper on the surface. Not a big one but fun nevertheless. 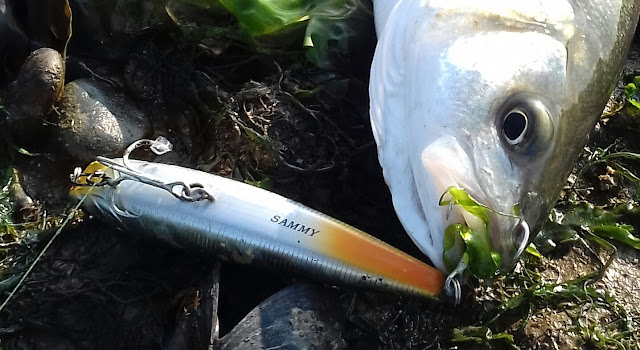 Another ten minutes and the water was too coloured and I was off to the next mark to try for a mullet. Imagine my surprise when I got there and someone else was fishing. I was outraged. How dare they ? I did notice, though, that he was spinning and quickly got hooked up on the snags where most of the fish were. It's inches deep and impossible to use a spinner without getting snagged. He moved down to the deeper water and I moved into his vacated spot.

I'd only been fishing five minutes and as the fly passed over the shallows the line tightened. I pulled hard on the fly line to set the hook and, would you feckin' believe it, I was into a mullet. I still can't believe I can ( sometimes ) catch them on the fly. I think it goes back to when I was a kid and we used to watch them in their thousands in Alresford creek. We all tried and failed to catch even one of them.

Despite catching one almost straight away there were few fish about so I left feeling smug and celebrated at lunchtime at the local Italian restaurant. Calzone pizza with chillis, rocket, spicy sausage and mozzarella, followed by affogato. Wunderbar.

I decided I'd go for the "Essex Grand Slam" ( bass/mullet/pike in the same day on lure/fly ), so after lunch headed off to complete it with the easiest one of the three. Obviously, I failed.

That's what happens when you get too cocky.

" Plans are nothing. Planning is everything "

Dwight was talking about D Day. We had intended to have a couple of weeks in France in the camper, but decided at the last moment to head to the west country, Dorset to be precise. 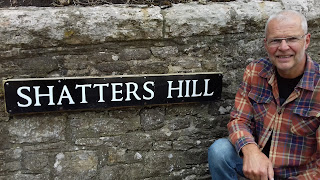 First stop, the tackle shop at Wareham, then on to a campsite on the Purbeck coast, with a twenty minute walk down to the rocks. Had a few hours catching wrasse on some smelly Mersea lug I'd bought along. Only one garfish , a bit surprising. Good fun though. 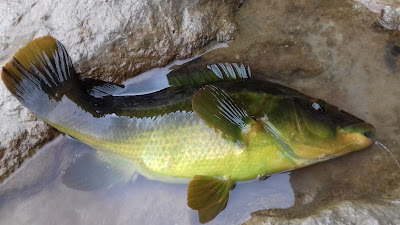 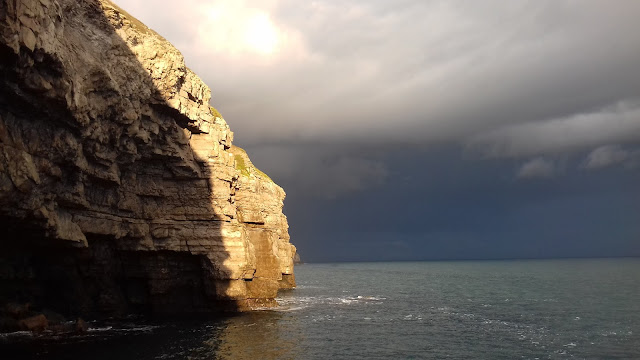 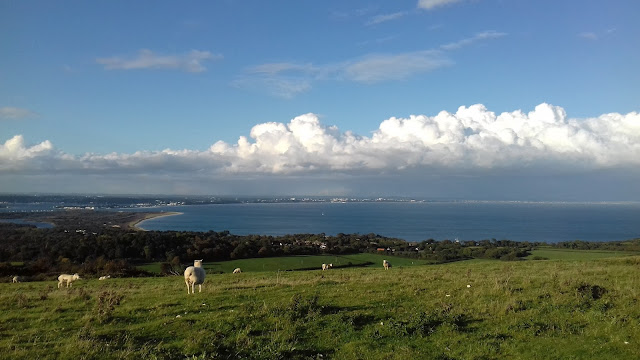 Had some great trail running during the week, along the high chalk ridges overlooking Poole harbour, Studland and Swanage bay. Stunning. 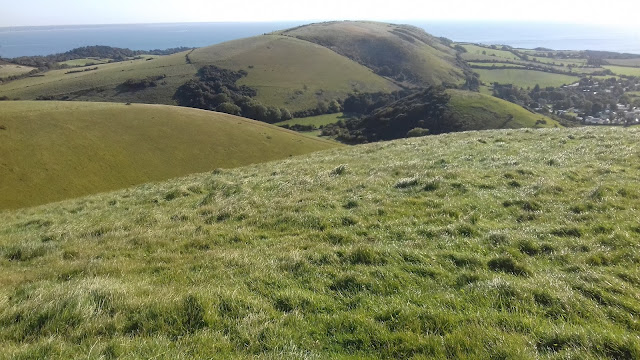 One day started grimly. Cold, grey with a nasty northerly wind. We took the camper up to Hardy's Monument, got out, walked around for five minutes, froze our dooh dahs off and got back inside. The crap weather continued until late afternoon and then the clouds lifted, the sun came out and the world looked a different place. Time for a quick fish.


Twenty minutes later I was on Chesil beach, the sea as flat as a pancake and loads of gars and mackerel attacking the whitebait shoals. Within a few casts I started to get bites and then the float shot under and the first garfish of the evening leapt out of the water before being slid on to the shingle. They don't half go on light gear. 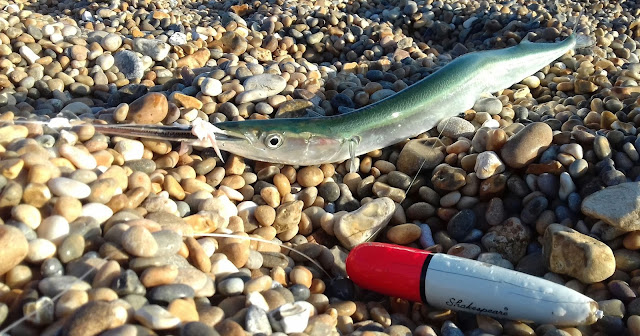 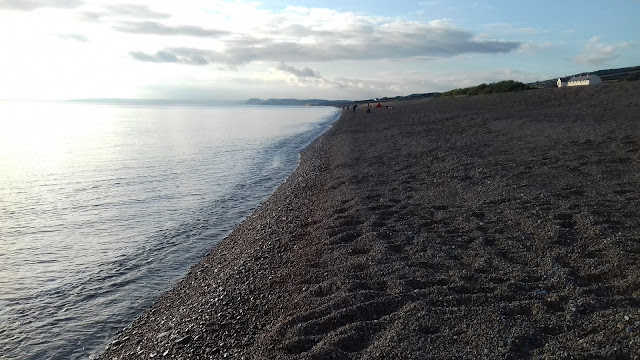 I ended up with eight more gars and several makkie before it was time to leave.

The next morning, after a longer than anticipated off road run ( bad signposting, that's what I'm blaming it on ), it was back for another go. First cast, bang, gar on. There were loads of them and I was getting a bite every cast until the tide eased. I stopped counting at twenty gars so it was a good morning. Back to the camper for (very) fresh mackerel and crusty bread. Bloody lovely. 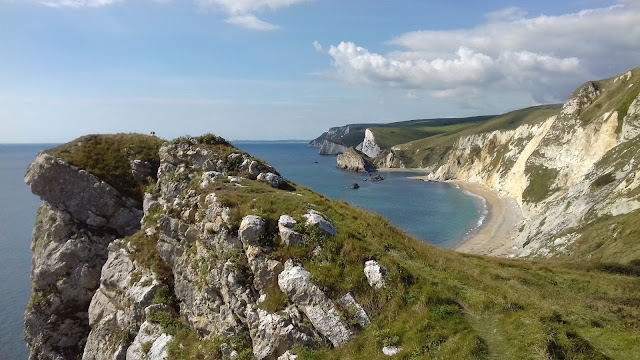 Got lucky with the weather, plenty of fishing, eating good food, a few drinks, great trail running and a bit of walking. That'll do for me. 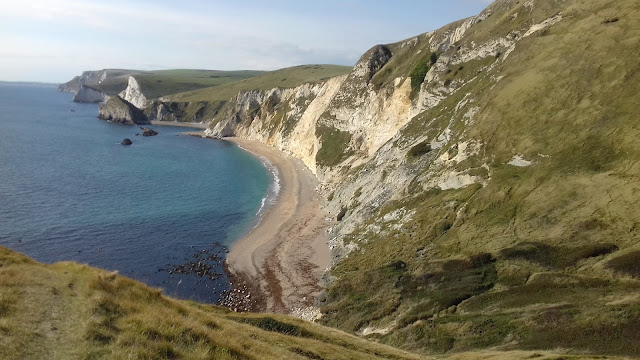 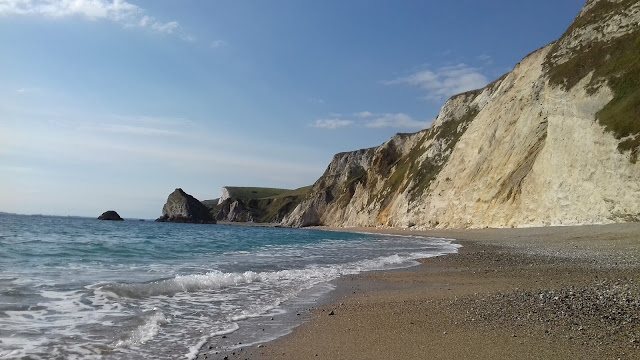 Anyway, I won't bore you or myself further. It was a mighty fine trip.
Posted by The Essex Scribbler at 11:45 4 comments: 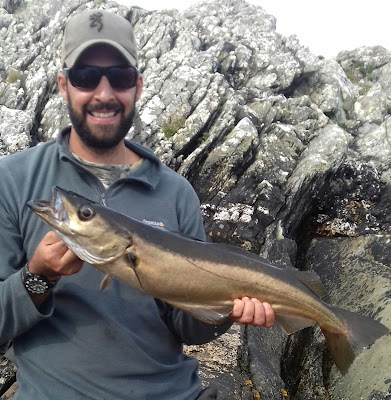 Another trip with The Mighty Turdster to the south west of Ireland, the Beara Peninsula, a fantastic place. 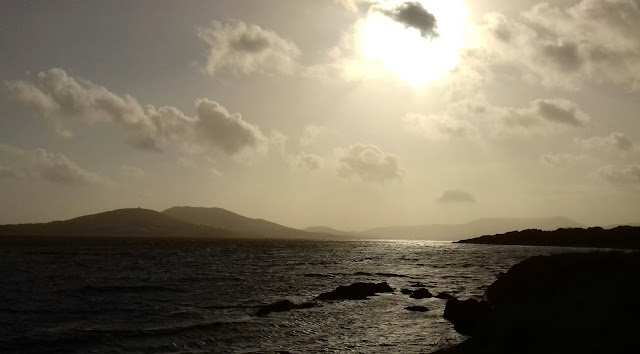 Fishing was a bit tougher this year, but we still had plenty of fish. We saw lots of dolphins, a sea otter and were dive bombed by a peregrine which came within touching distance. As always, we enjoyed watching the gannets dive on the sand eel and mackerel shoals. What an incredible sight and sound. 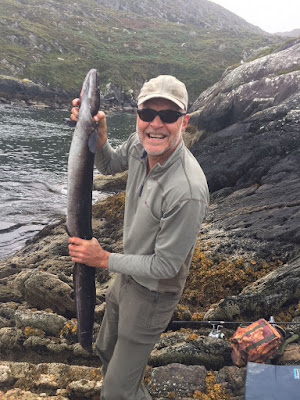 One evening we were heading to a mark known as "Conger Rock". This was in a very remote spot, driving around tiny winding lanes, which were getting smaller and smaller the further we went. The recent rain had ripped away much of the track and as we went down a very steep part I had concerns about getting back up again. 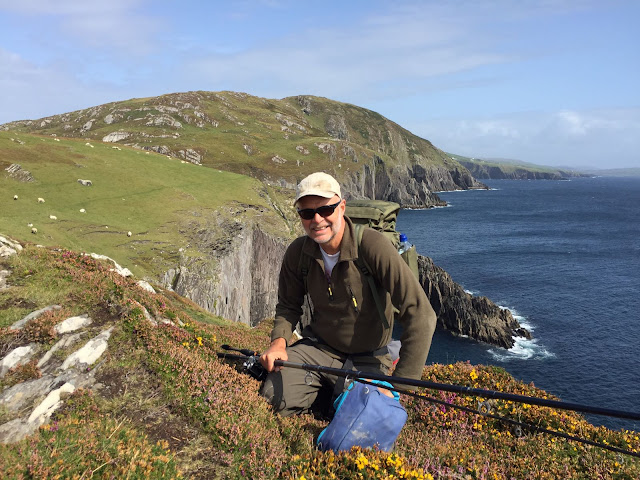 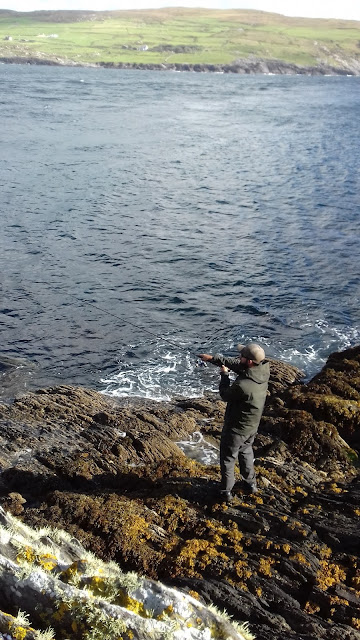 We saw a bloke digging something that looked like a grave in the middle of nowhere. Very creepy. Turdy shouted out to him to ask if it was OK to leave the car here. The bloke laughed like a maniac and came bounding across, sticking his scarred head right in the car, blabbering away in an indecipherable accent. Turdy let out a weird noise and was clearly rattled at this character straight out of the film "Deliverance". 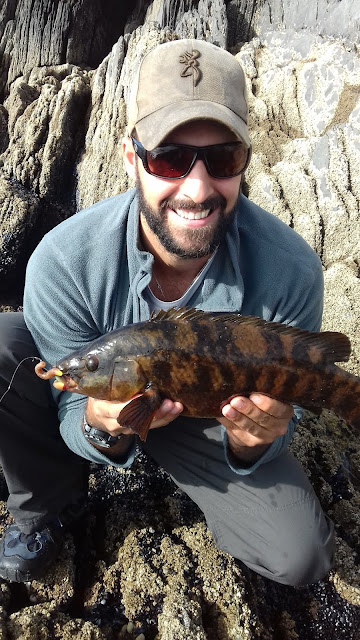 We asked him the same question several times but received no understandable answer. We looked down to Conger Rock, which was being hammered by a big Atlantic swell, with spray everywhere and glanced down the ever steepening track.

Turdy turned to me and said " This feels wrong, lets get out of here". We did and I was pretty pleased about it too. It did feel very strange indeed. 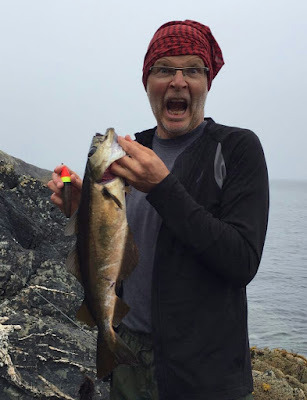 One day at a lovely spot called Cod Head, Turdy hooked a really big conger. When he pulled into it he thought he was stuck on the bottom, but after a few seconds there were two huge thumps on the rod as it whooped right over. A few seconds later the rod sprang back and after Turdy wound in we found that the conger had bitten through a 150lb mono trace. Blimey Charlie. 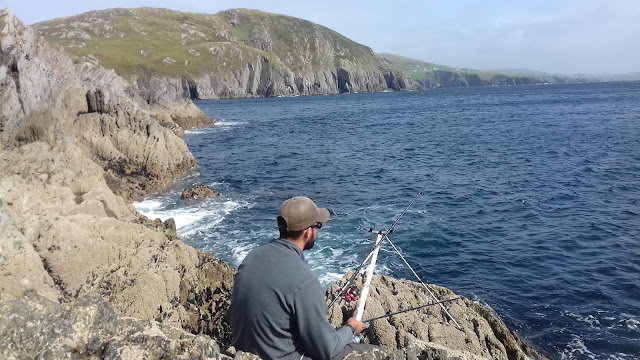 The best session was on our last day when we took the cable car over to Dursey Island. That in itself was an interesting experience, high above the Atlantic in 30 mph winds. 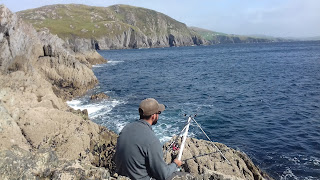 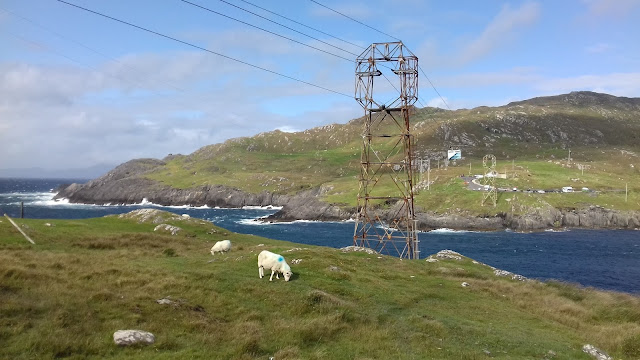 We found masses of coalfish in the fast water in the sound between the island and mainland. It was steaming through, at maybe six to eight knots and was sixty or seventy feet deep and those fish were hitting our lures every cast.


They were incredibly hard fighters, especially with assistance of the current and averaged 3-4lb. I had two around 5lb and Turdy lost one in the kelp at least that big. A great day. 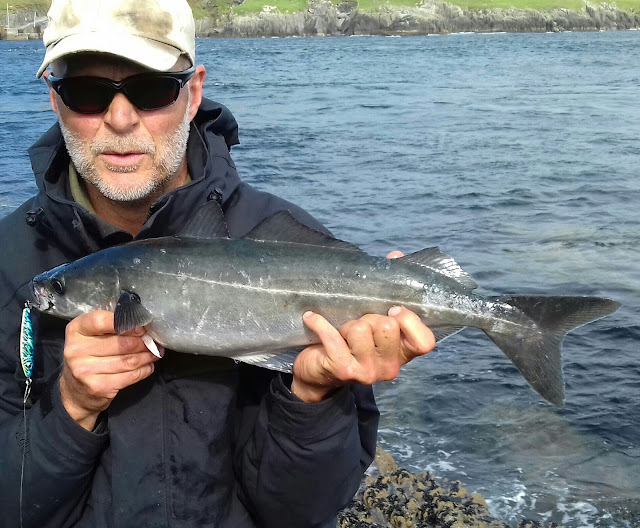 We put circle hooks on the metal lures to enable us to fish deep in the kelp without getting hooked up. One of those rare occasions when something worked as well in practice as it did in theory. 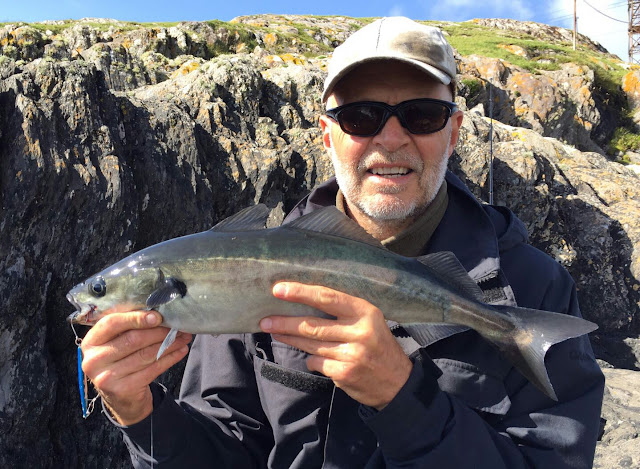 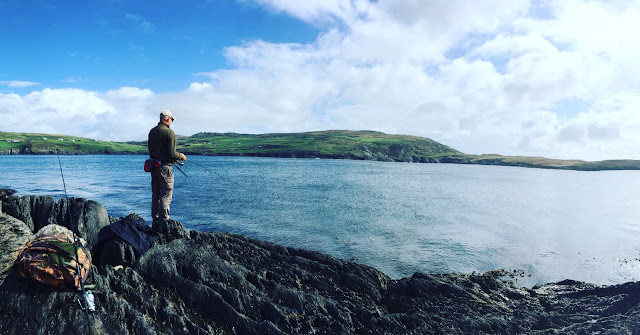 Another great trip.
Posted by The Essex Scribbler at 12:56 5 comments:

“I run because if I didn’t, I’d be sluggish and glum and spend too much time on the couch. I run to breathe the fresh air. I run to explore. I run to escape the ordinary. I run to savour the trip along the way. Life becomes a little more vibrant, a little more intense. I like that.” 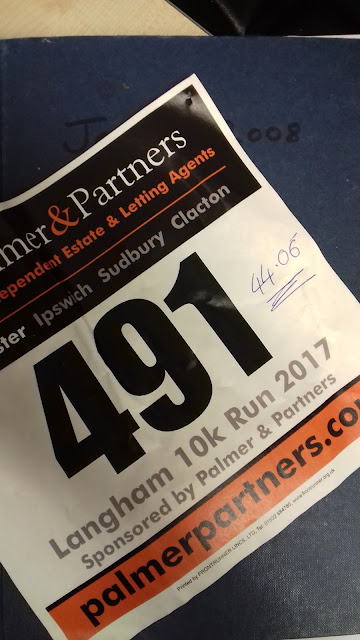 I did the Langham 10K at the weekend and I didn't enjoy it at all at the time. Apart from finishing.

This got me thinking about why we do things. Why I do things. Why is always the most interesting question. In almost anything, "how" is easily explained, "why" is much more difficult.

Why do I run ? Well, it isn't "to get fit". I can't stick at anything I don't enjoy. I do it because I like it for itself. Getting fit is just a bonus.

The day to day running I do is off road, along footpaths, trails, woods and marshes. Even when I'm training ( oh yes, just like Mo Farah ) for a race I don't time my runs. I just run according to how I feel, sometimes a hard session and sometimes I'll stop and admire the view or have a chat. Sometimes the run never gets past a walk.

When you play football, cricket, tennis and any number of sports you can reasonably expect to win, at least some of the time. When you enter a race of 900 as I did yesterday and you're fifty three years old, you ain't ever going to win. On the one hand running, completing and hopefully improving your times builds your confidence and on the other the fact that you'll never win keeps you humble. I like that.

Yesterday I arrived early, to pick up my number and register. I mingled with the other runners and took in the atmosphere. Five minutes from the start we were told to approach start line and I pushed through to a position when I wouldn't be in the way of faster runners and others wouldn't be in my way. Then we were off, the most dangerous time when in a big group, it's so easy to be tripped up.

After a few minutes I was struggling to keep up a decent pace whilst relaxing and breathing properly. Normally this sorts itself out, but yesterday was uncomfortable from the start, I felt I was off the pace and struggling. As we passed the the half way mark I asked a bloke what the time was and surprisingly we were at a pace that if continued, would enable me to beat my previous best time. That's why I was struggling.

Good opportunity though, if I could keep it up. It was bloody uncomfortable, I wasn't enjoying it. I was willing the markers indicating each passing kilometre to appear. 6 km.....what feels like ages later where is 7 km, we must have past it ? A few minutes later 8 km appears.

2 km to go. Keep going, it'll be over in under ten minutes. 9 km, almost there, I'm feeling shite and slowing down, or that's how it feels. I turn into the straight towards the finish and see the digital clock,  which is telling me it's my quickest time yet. I cross the finish line, thank fuck it's over.


After I get my breath back, I walk over and get a cup of tea and a bit of cake and watch the other runners coming in. What did I say about not being enjoyable today ? It is, but only in retrospect.

It doesn't matter what the actual time is or whether it's a good or bad time. It's the fastest I've done it and I'm getting quicker ( sometimes ) as I age. A small victory. Chasing away the decline that time will inevitably deliver. But not today.
Posted by The Essex Scribbler at 13:30 6 comments: