Pride Comes Before A Fall ?

After the (relative) success of the Half Marathon a few weeks ago I signed up for the Coastal Trail Series South Devon Marathon in February. This takes place along the south west coastal path and comprises of some extremely hilly terrain and its also a bit longer than a marathon, at 28.5 miles.

Whether I've bitten off more than I can chew remains to be seen, but I'm pretty confident I can do it provided I train properly. We'll see.

I tried to get the Manc Midgit to join me. At first all he could say was "28.5 miles ? In February ? In February ?" I explained that the south west was not like the frozen wasteland that is the north of England and I think he may have joined me had his long standing ankle injury not started causing him trouble last week.

The Silent Assassin has managed to secure a place in the London Marathon in April and decided that the Devon race would interfere with his preparation (Wimp. What's wrong with the youngsters these days?). In the end I managed to persuade Perry Taylor, an ultra fit customer/mate to enter. Three weeks before he's doing a 45 mile "Ultra" ! Think I may struggle to keep up with him.

I've started to increase the distance of the long run at weekends and yesterday did a steady 15 miles, starting at Mistley, through Manningtree, Dedham, Flatford, East End, Cattawade and back. Felt nice and easy, though I didn't push it pace wise.

Today I thought I'd get the mountain bike out and had a good, very muddy,  ride over to Wivenhoe and along the river. Beautiful crisp day with clear blue sky, bloody lovely. 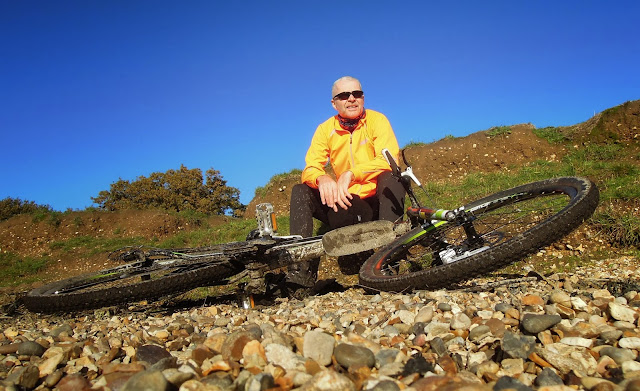 Posted by The Essex Scribbler at 07:06 No comments: