The West Is Best

I've got lots of "favourite places" and the south west coast of Ireland is definitely one of them.
Last week I was on the Beara Peninsula in south west Ireland for a week of fishing and rock hopping with The Mighty Turdster. Great scenery, uncrowded, nice people and superb fishing, Sometimes the weather isn't too bad either.

The number one requirement was to catch some fresh mackerel for bait, so we headed off to a likely mark. First cast and Turdy hooked a big pollack, which after a while he had under control. Unfortunately, we were thirty feet up a cliff and he ended up losing it. Sod's law. 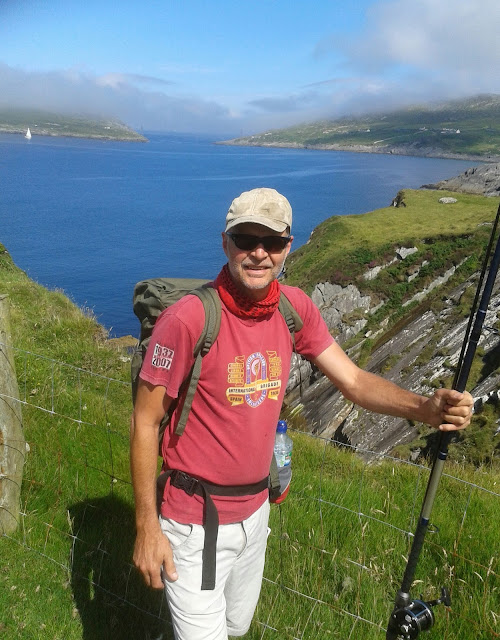 Makkie eventually caught and the first night we had a cracking session, with Turdy having a huss of 10lb and me a very angry conger of 17lb, We had non stop action, with some lost and some landed. A good start.


I have to admit Turdy was Huss King on this trip. We both caught a similar amount, but mine were all 4-7lb, while Turdy had four of 9-10lb. 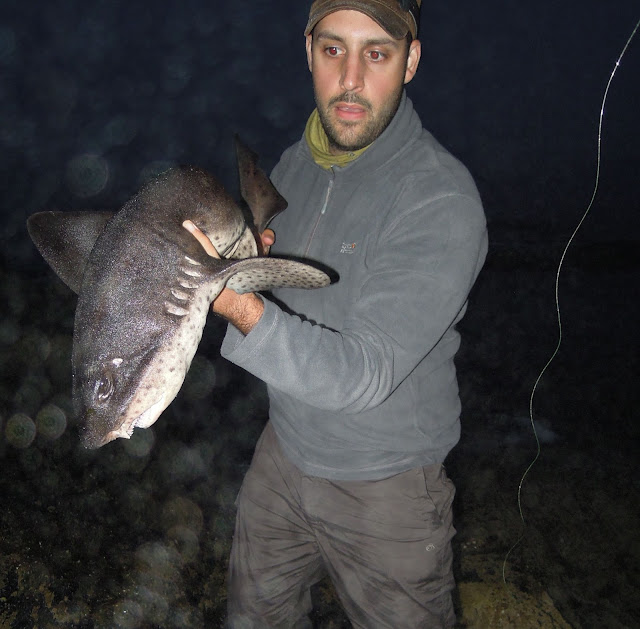 He also managed to wangle out a three bearded rockling on a big piece of mackerel. Weird looking beast. 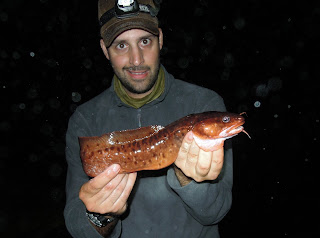 We had several sessions at a deep water mark where we again had huss and conger, plus pollack and mackerel. The real highlight was watching a pod of forty of fifty dolphins, along with a huge fin whale. An amazing sight, undoubtedly the highlight of the trip. 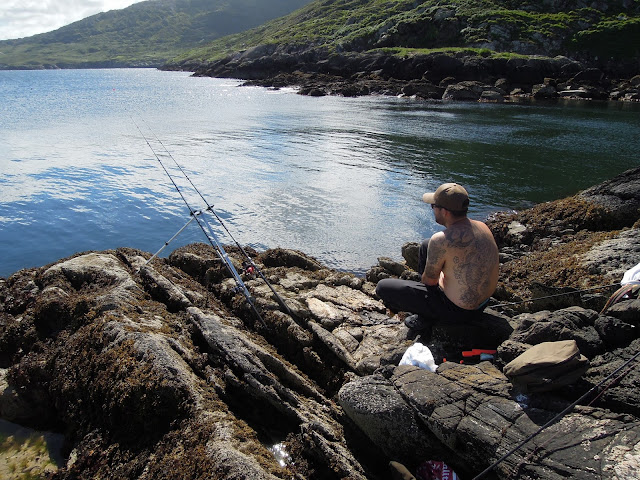 I had a cracking pollack of 5lb 12oz on light lure gear at Cod's Head. Apologies for the half arsed attempt at a pirate look, but it was hot and there was nobody about for several miles, so to hell with it. 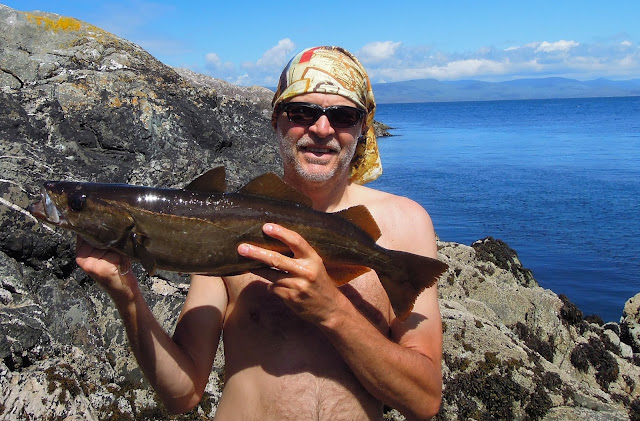 One evening we heard what we thought was a wading bird calling on the rocks. Very high pitched call. Turned out to be a sea otter. Another interesting sighting.

The lure fishing in front of our B and B was again excellent. The couple of hours around dusk produced countless pollack, a handful of coalies, plenty of mackie, scad and, surprisingly, a total of eight codling around the 1.5lb - 2,5lb mark. All fish took slim spoon type lures, which out fished soft plastics and rubber eels massively, On the last night I fished until darkness on the rock ledge two minutes from the B and B, getting a take almost every cast, The sun was setting, the sea was calm, it was beautifully mild and I was surrounded by stunning scenery.  Sometimes you really do need to take a minute and acknowledge how lucky you are.
Posted by The Essex Scribbler at 13:03 3 comments:

On the way back from northern Spain, we called in at Agde on the Med. Every bit of the French Med I've ever been to has been crowded, busy and a disappointment. Maybe this would be different. No. it was bloody horrible and I couldn't wait to leave. Which we did. Immediately.

We ended up in the Tarn Gorge. Beautiful, much more like it and a two minute walk from the river. 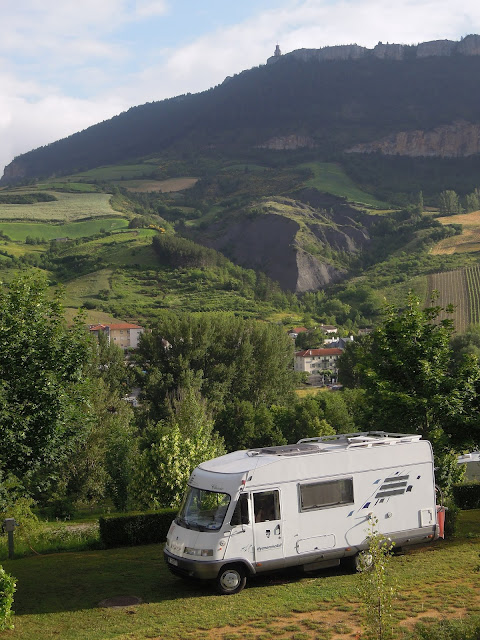 Down to the river and I quickly caught a few chub. Saw a few barbel, but not as many as I'd expected. Managed to get a nice one around 5lb on the second session. I was fishing, when out of the corner of my eye I saw what I took to be an otter. It obviously hadn't seen me and actually swam under my rod, no more than eight feet from me, where it became apparent it was a beaver, not an otter. Incredibly, in the next half hour I saw a total of five of them. Managed one poor photo, but a great sight. 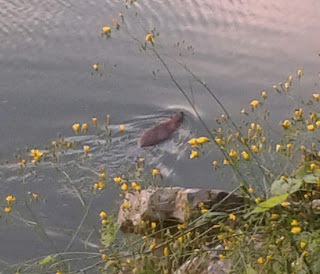 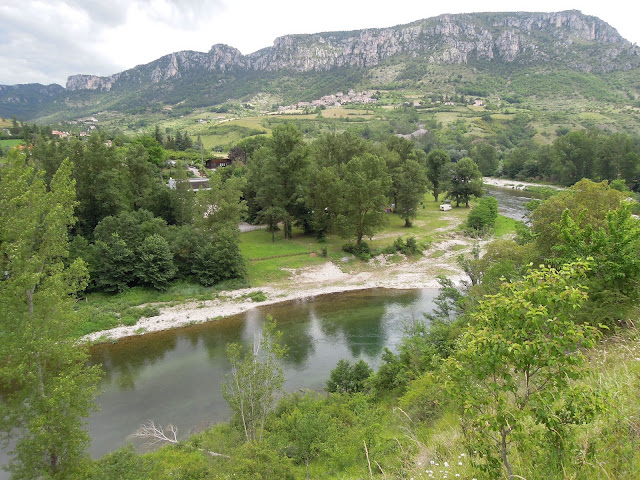 Lovely river, as you can see. 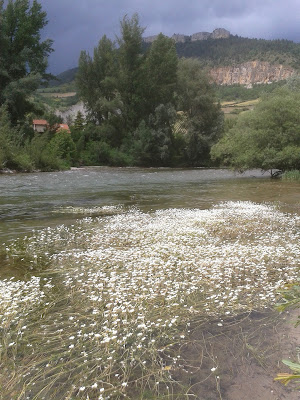 I set out on a bike ride up the Tarn and Jonte gorges. What an incredible place.As usual the photos don't do it justice. So quiet too, with very little traffic. I took a very ( very ) steep, small track up the side of the gorge, just about translating the warning sign ( roughly, no safety barriers / falling rocks ). What a fantastic, exhilarating ride. Totally silent, apart from the griffin vultures and ravens circling above. On and on it went, with some extreme switchbacks and far steeper gradient than the previous ride in the Pyrenees. Definitely one of the highlights of the trip. 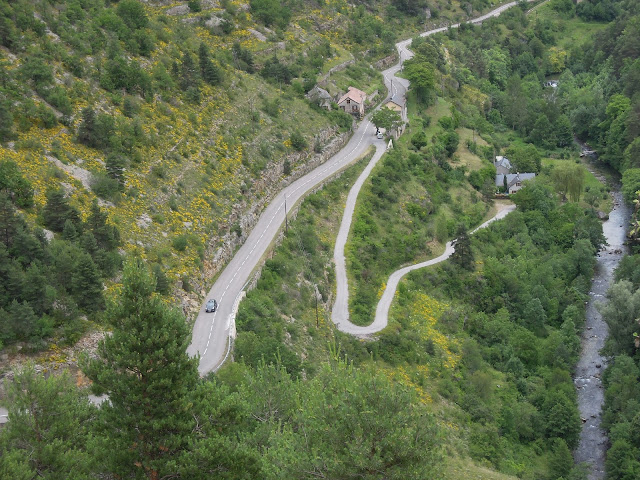 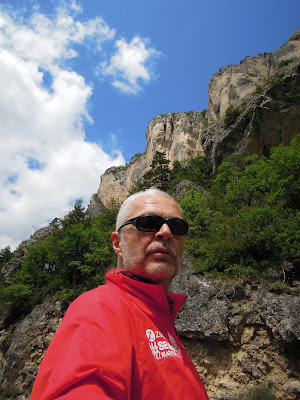 A few days later we were in the Aveyron region. I love it here, it's the arse end of nowhere, great scenery and not too many people. Nice campsite right on a 500 acre reservoir. You could fish and be served chilled wine/beer and cheese from ten yards away. How civilized. 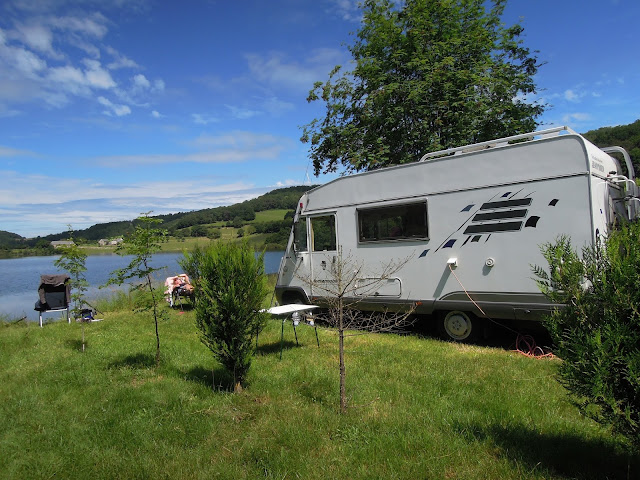 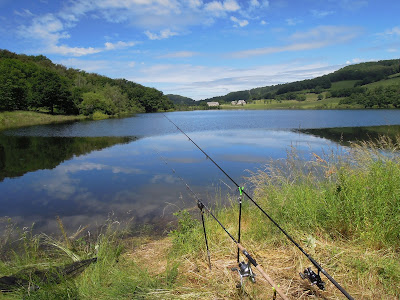 See, I told you so. When we arrived, the wind was pushing strongly into our bay. I was convinced I'd have one of the huge carp that reside in this lake. On went an eleven year old Nash pineapple boilie. Sure enough, after an hour or so the rod bent over and I was attached to a very heavy, angry carp that was ripping line off and heading for a load of sunken trees. I put a massive amount of pressure on, just managing to keep it out of the snags, but just as it seemed I was going to land it, the hook pulled out. Oh dear. I was not pleased.

Next day I took a canoe out and saw four of the biggest carp I've ever seen. They were huge.

Unfortunately, that was to be the only carp I hooked, as the weather changed and it became very hot, with a strong wind, unfortunately of my back. Oh well. I managed some really good sized roach and tench though, so still had some fun. Lovely place too. 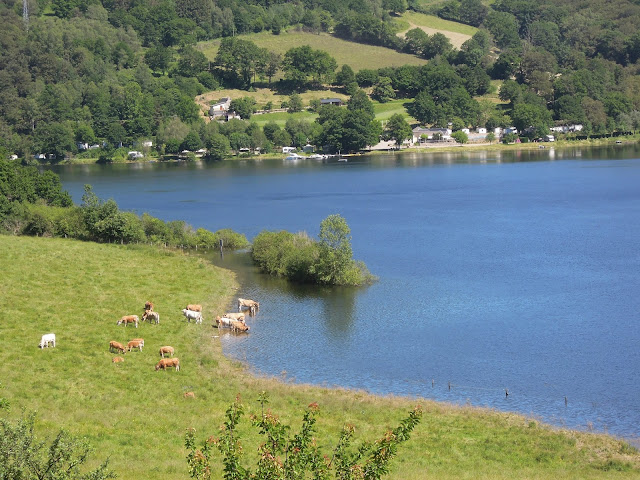 Time to head north for the ferry. We stayed on the banks of the Loire for a night, where the detritus of the recent floods prevented me fishing the river. Well, I fished, had three casts and three snag ups and then gave up.

We had a bit of excitement in Belgium when I drove on the wrong side of the roadt on the outskirts of Antwerp, being roundly abused and laughed at by drinkers outside a bar. Somehow we ended up in a campsite in the city, but it wasn't such a bad choice, as within two minutes we'd found a nice riverside bar.

A great trip and I love the old bus already.
Posted by The Essex Scribbler at 08:43 9 comments:

It all happens at once, doesn't it ? We sit around in the winter, then it all kicks off in spring and summer. Been too busy to blog again, it's been ages.

Loaded up the camper at the beginning of June for a three week trip around France and northern Spain. It's a big beast ( LHD too ) and prior to leaving I'd only driven it a few times, so it was a question of learning as you went. 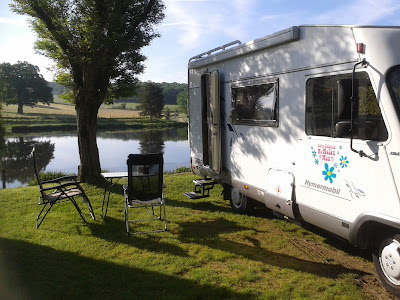 First stop was a very quiet site in the Loire, then on quickly south, next stop near Limoges, then a lovely quiet village in between Carcasonne and the Pyrenees, conveniently situated on a huge lake. 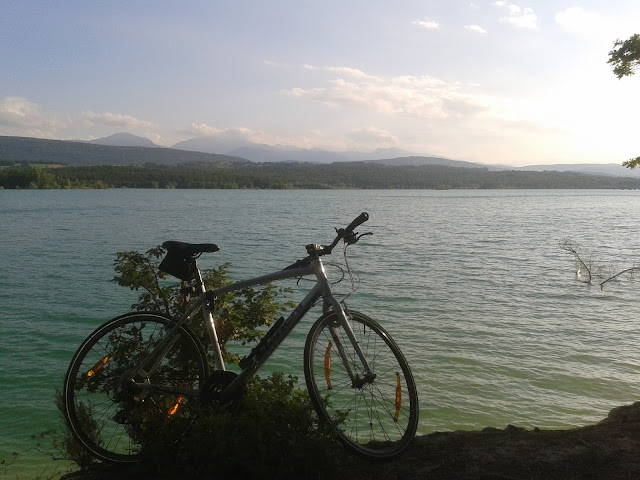 Lovely restaurant close by, I'd bore you with what we eat but you're not interested are you ? It was run by a British couple and they had bangers and mash on the menu. The French were lapping it up. Really. 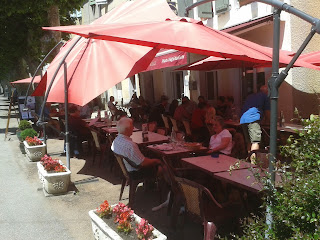 Into the Pyrenees for a bit of cycling and a go at rock climbing.There's nothing I can't do (apart from wire a plug ). 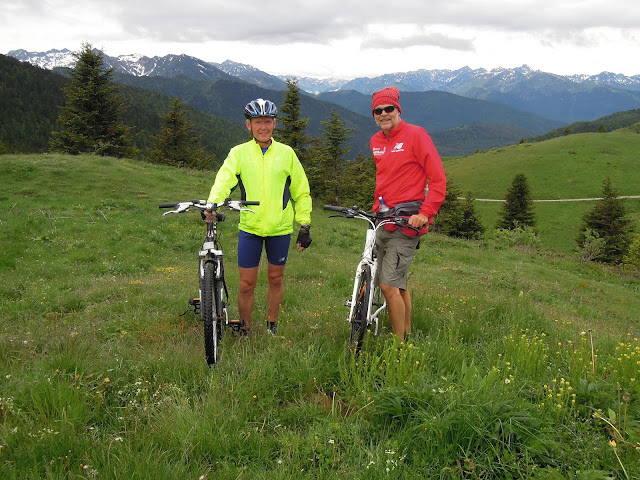 Me and brother in law Ian attacked the Col Du Pradel on a cold Sunday morning, reaching the 1680 metre summit in a time that Chris Froome and co would not be proud of. We were though, a couple of fifty somethings cycling uphill for getting on for an hour. The descent was terrifying, especially as I over cooked one corner and narrowly avoided a rather steep drop.

Rock climbing the next day. It was strangely enjoyable. 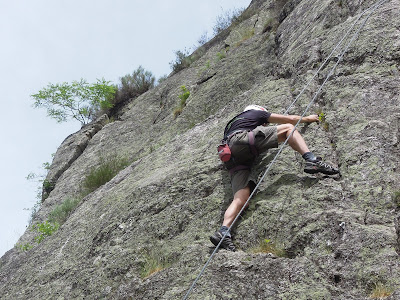 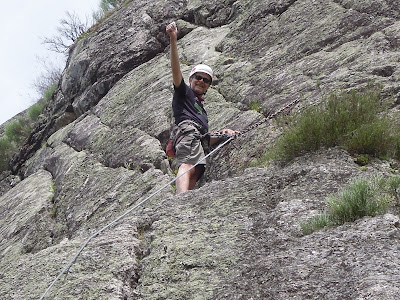 The weather in the Pyrenees was a bit iffy, so on to the Spanish side we went. Surprisingly, it wasn't much warmer, but we stayed a  a couple of cracking places. 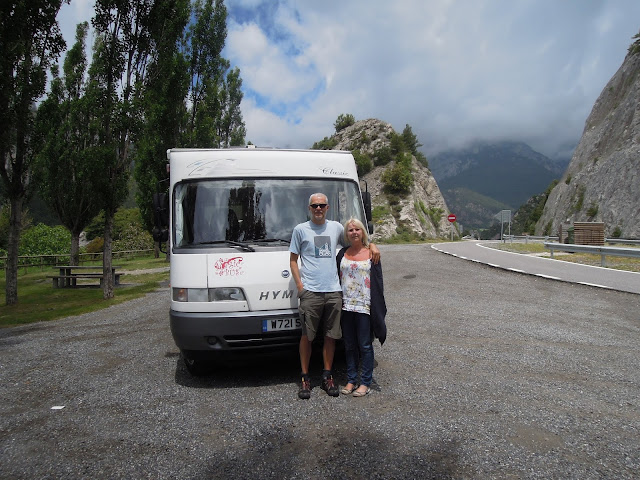 I'd not got the rods out since we set out, but had plans to change that in the coming week......
Posted by The Essex Scribbler at 07:56 No comments: