" But best of all I love the barbels because they roll like big brown and white cats upon golden shallows and sing in the moonlight with the joie de vivre of June. And because, so, they are all Thames to me and wild rose time and streams running down from the weir "

Patrick Chalmers
At The Tail of the Weir

The Mighty Turdster said to me a few weeks ago he'd like to catch a barbel, a fish he'd never caught before. It's been ten years since I caught one too, so it seemed like a good idea. I looked on the internet at a few stretches of the Wye and Severn and then stumbled across a video of a very boring man catching loads of barbel on a beautiful French river.

It turned out to be the river Meuse in the Ardennes region of France and after a bit of further investigation I tracked down a B and B right on the banks of the river run by a bloke from Norfolk.
A phone call later and we were booked up for mid June.

Ade, the B and B owner, said it was a big, powerful river and recommended heavy gear. 15lb main line and long rods capable of throwing 3-5 oz feeders. I put my engineering head on and modified a sea fishing tripod with a little bit of help. See photo below. This ranks alongside the shelves I put up in 2014 as my greatest feat of DIY. 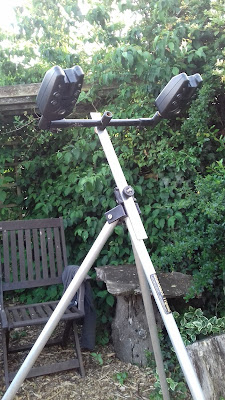 Sod's law prevailed and our trip coincided with boiling hot sunny weather with temperatures in the early 30s. Never mind, better than rain, although it was too hot ( for me anyway ) to fish in the middle of the day. 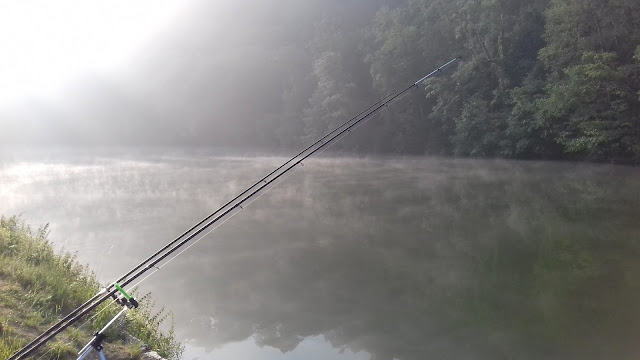 The first evening I managed to lose a couple of barbel and catch a load of bream. NeXt morning Turdster and me both got off the mark with two barbel each, not big fish, maybe 3-4lb, but a start. 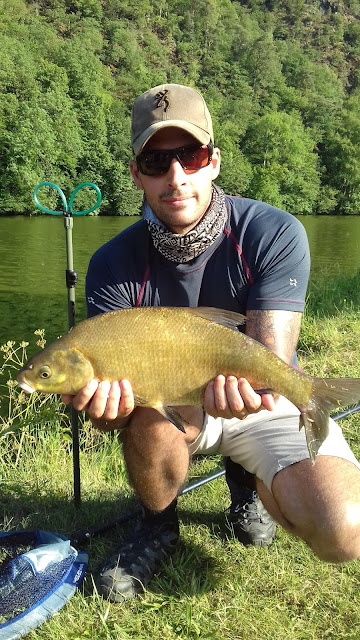 It certainly is a beautiful area. The far bank is very heavily forested for miles. We saw three different types of buzzards, peregrine falcons, kingfishers and a wild boar bathing on the opposite bank. 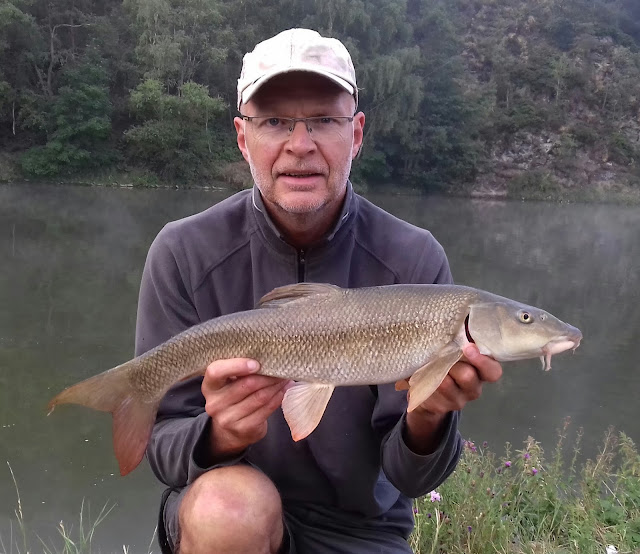 A local French bloke we spoke to had caught carp to 45lb and cats to just under 100lb in the past few seasons, so there's some big fish there.

We managed, barbel, chub, dace and gudgeon, but there are roach, ide, sneep, pike and zander too. 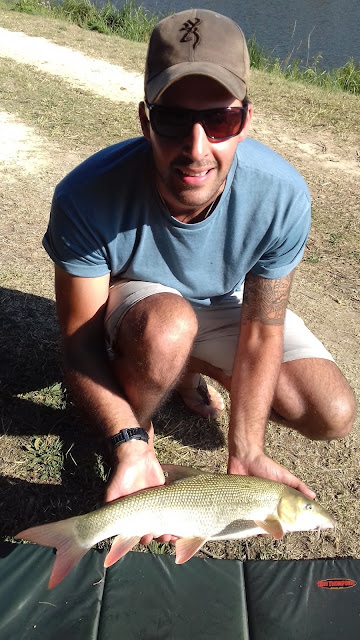 On the last evening we went back to our favourite swims. I baited with half dozen big feeder fulls of sweetcorn, pellet and seed and left the swim to settle for half an hour. Turdy fished his swim straight away and was instantly into bream. A day or two ago he loved those bream but by now wasn't keen on them at all. 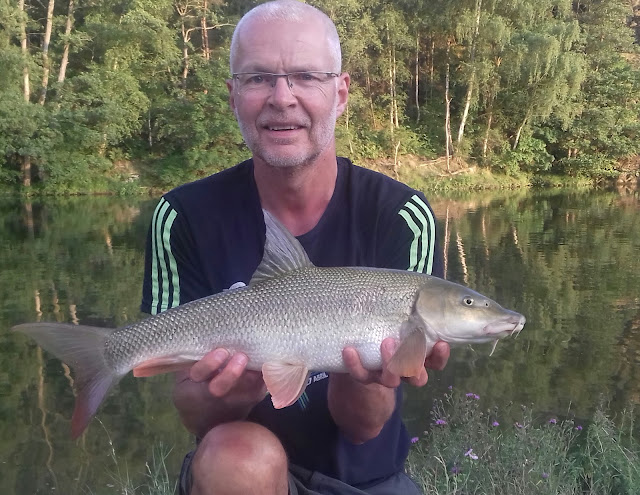 My first cast resulted in a screaming take and a barbel about 6lb ploughed up and down the swim before hitting the net. A few minutes later I was in again. This continued as the light faded and in that magical hour around dusk I managed six barbel, a nice chub and a few bream, as well as losing something big to a hook pull ( may have been a cat I think ) 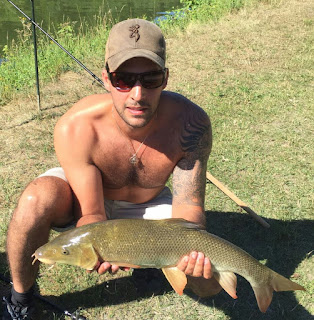 The Turdster had a couple of barbel and lots and lots of those lovely bream. 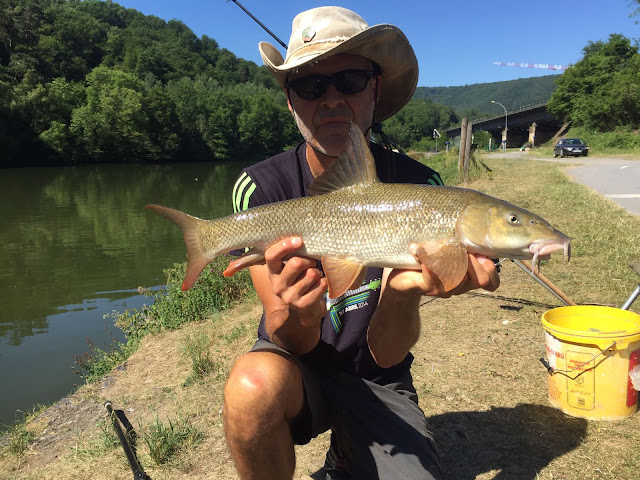 Considering the conditions we did pretty well I think. I'd like to fish it in the autumn when it's got a bit more flow and colour. We learnt plenty too and I've got the hunger back for freshwater fishing.

Another great trip.
Posted by The Essex Scribbler at 10:11 4 comments:

Me and Lord Pualus the Carp King have had a couple of short "below the radar" sessions at my new favourite pit.
First trip was a very quick evening session. Nice and warm, wind pushing in to our bank, spot on.
We managed three between us, plus I lost a decent fish on the last cast. Best one to Pualus, a common of  around 14 or 15lb.
A few days later a very early morning trip was planned. We were set up by 03.15, with dawn just beginning to break and a full moon glowing. 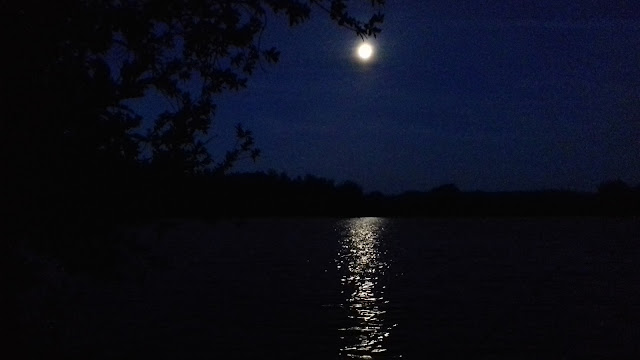 A few handfuls of maize was spread around my area, with Pualus opting for tiger nuts because "I only have to bait up once in the session ". Fair enough.

I was in first with a nicely conditioned mirror, shortly followed by another. Then another.
Pualus hadn't had a touch. He decided that action was required, so flicked out his bait a bit further, right on the edge of a slightly deeper gully, chucked in several handfuls of tigers and within two minutes had a screaming run. 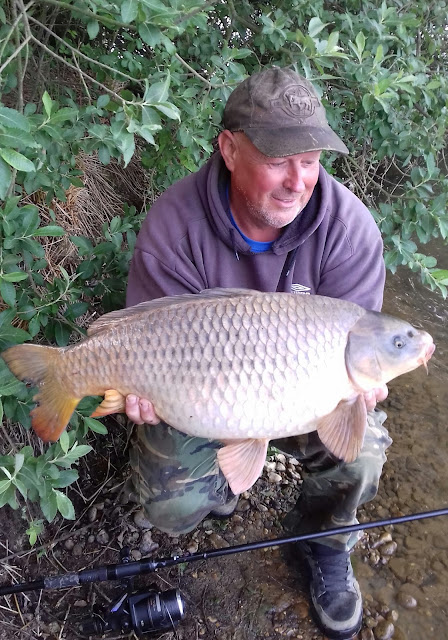 To say these fish go mad when you hook them is an understatement. They tear off at such speed you can here the line zipping through the water. Forget trying to backwind, you can't keep up with them.
The fish Lord Pualus is holding in the picture above went so crazy we were laughing our dicks off as he tried in vain to control it.

All the fish were again in absolutely pristine condition. Surprisingly, despite 80 or 90 per cent of the fish we've been seeing being ghostie or metallic types, all the fish this morning were "standard" commons or mirrors ( though that description does them an injustice ).
We finished up with six between us, best again around 15lb and sneaked off without being seen for coffee and breakfast in the garden. Happy days.

Posted by The Essex Scribbler at 10:02 2 comments:

With A Little Help From My Friends

Lucky Bob called last week to invite me to try for a tope from a oh-so-secret-spot somewhere on the East Anglian coast. A beach caught tope is a very, very rare beast, so I didn't need asking twice.

I met Bob first thing in the morning and we started our three mile trek over two creeks, mudflats and endless marshland. I donned my  " Essex Waders " ( an old pair of trainers bound with duct tape so the mud wouldn't suck them off my feet, a technique perfected for the Maldon mud race ) and shorts, on the basis that with waders and troosers you were going to get sweaty wet at best or get them full with sea water a worst.

The marshes were full of ground nesting waders, oyster catchers, plovers and redshank and surprisingly we saw loads of deer tracks too. 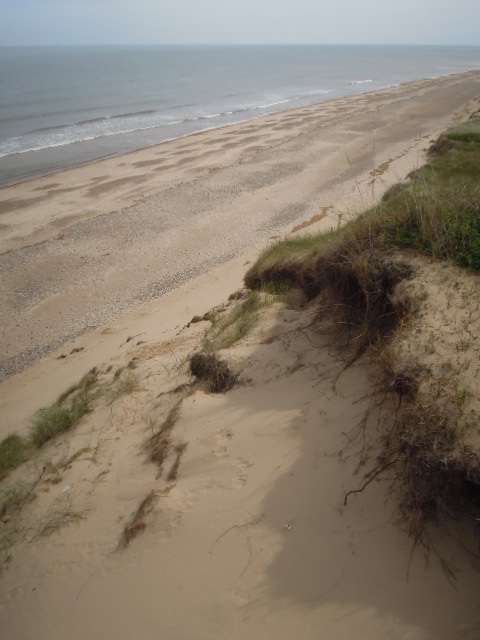 We eventually reached a totally deserted beach in glorious sunshine. What a place. Very, very remote and as unspoilt as it gets.

The fishing was slow, as you'd expect when you're basically trying to win a fishing lottery. LB had a small bass and a flounder on his light gear, but other than that, all was quiet. I was happy lounging in the sun and taking photos though.

Just as confidence was beginning to wane, my close in rod bent round and the ratchet began to scream. I couldn't believe it. I tightened up and within seconds the fish was seventy or eighty yards along the beach to my right. I ran along the beach frantically winding to try and get a bit of line back whilst shouting at the top of my voice to LB.

In a few minutes we caught sight of a big tope, thrashing around in the surf and running up and down the beach. A big wave washed the fish closer in and LB grabbed the tail and dragged it ashore. 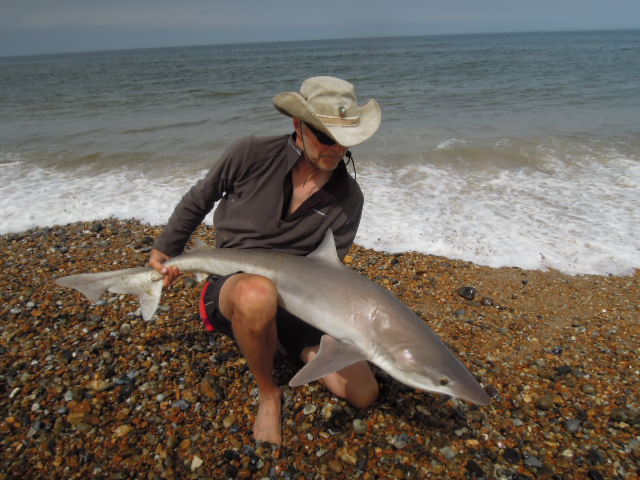 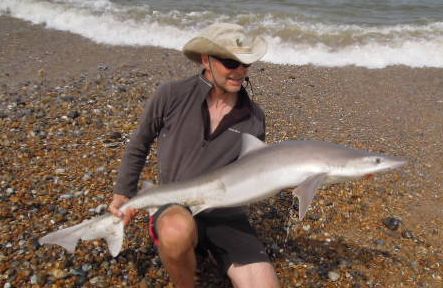 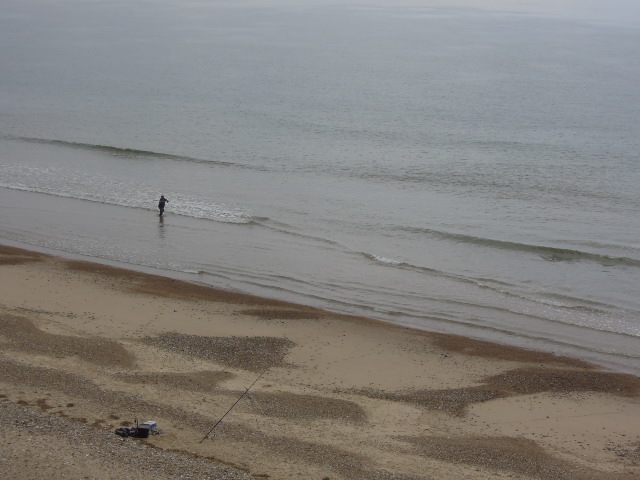 We fished on but had no further action. A storm raged a few miles away as we packed up and began our long trudge back. The tide was not down far enough for us to cross the first creek, so we sat down and waited half hour. I then tested the depth and slowly, very carefully made my way across before giving the OK to LB. He managed to get his waders full of water as I'd forgotton he's only 5' 6" tall and for good measure a few minutes later he went arse over head in the mud.

We were both hot, muddy and wet when we made it back and before driving home we popped in the pub for a celebratory and much appreciated pint.

It was a fantastic day in an extraordinary place. I got very lucky and would have had absolutely no chance without local knowledge. You really do need help from your mates sometimes.
Posted by The Essex Scribbler at 13:51 4 comments: