Been out a couple of times this week, both times fishing in the afternoon sun in a T shirt. Loads of fish about, rays in the daytime and hoards of whiting at night. Great times to be out and about.


Yesterday Norfolk Bob, Conc, me and Mason went to the roooooker beach . Nobody else about, a nice, very gentle offshore wind and blazing sunshine. Lovely.

By the time me and Mason turned up Bob and Conc had been fishing for three hours and had already had four each. A good start, that early in the tide. 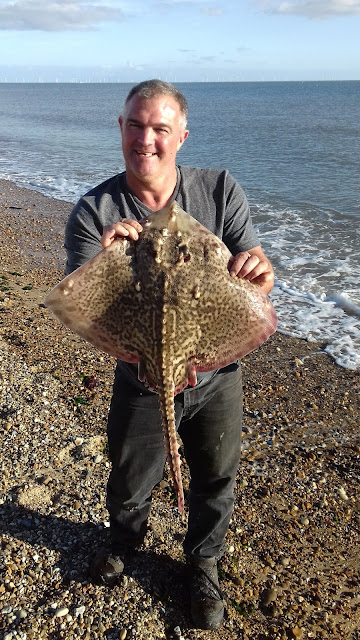 Tea on, jaffa cakes out and a chat in the sun before getting on with catching the fish. Bob carried on catching, while me and Conc's rods remained motionless. After an hour Mason's rod sprang back as a skate moved downtide. The rod hooped over and he needed all of his four stone to pump it in. His first sea fish, a nice roker just short of 6lb. He was well chuffed.  That got the ball rolling and it was steady bites until the top of the tide.

The wind, which was light anyway, dropped away until it was flat calm. It was absolutely beautiful, the fish continued to feed and we were treated to a fantastic sunset.


By this time Mason was getting hungry, so I said "last cast". As I was packing some of the gear away one of the rods pulled round and a decent roker thumped in the tide. It was half way in when Mason shouted that the other rod was pulling round. I told him to keep an eye on it but no sooner had I said that than it was off the rest and heading seaward. He grabbed it just in time, good lad. 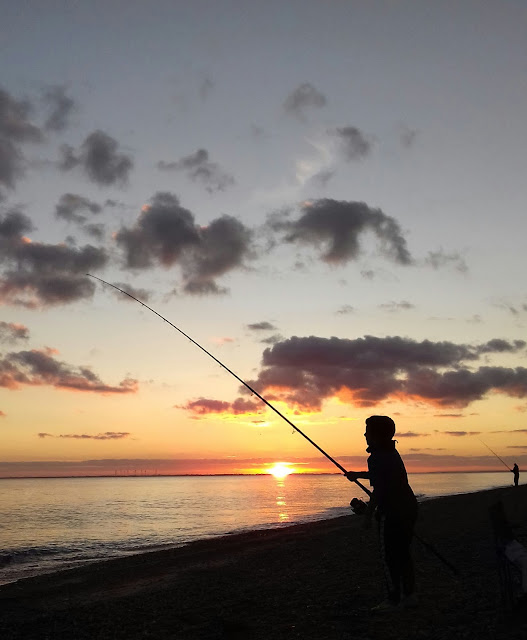 The last fish was the biggest of the day at 8.5lb, a nice way to finish off a really enjoyable afternoon. 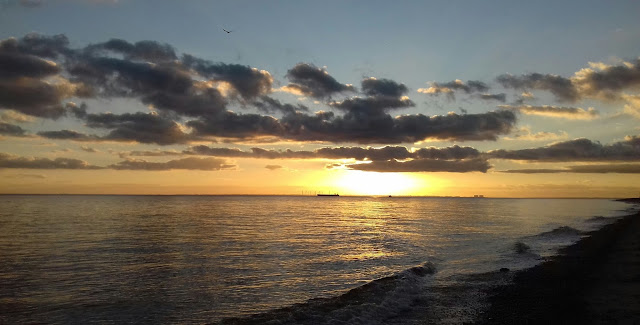 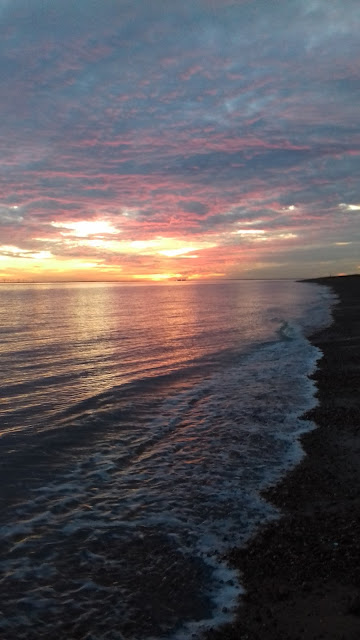 Posted by The Essex Scribbler at 13:10 2 comments:

The Flat Rats Are Back

"Walking is the best exercise by far. Habituate yourself to walk very far"

It's been a good few months since I fished at the local beach for the rays, but the freezer was low on the fish front and the tides looked spot on, so I grabbed the rods and off I went for the afternoon.

Conditions looked about spot on, calm, light south west wind, but you never can tell whether they'll be about. Nobody else about, which I always prefer, I was was cutting up some bait and looked up to see the tip bent right round and the rod butt lifting off the ground. It'd only been out there five minutes.

I wound down and felt the pleasing thud of a roker swimming down tide and a few minutes later the first one of the day was in the cool box. 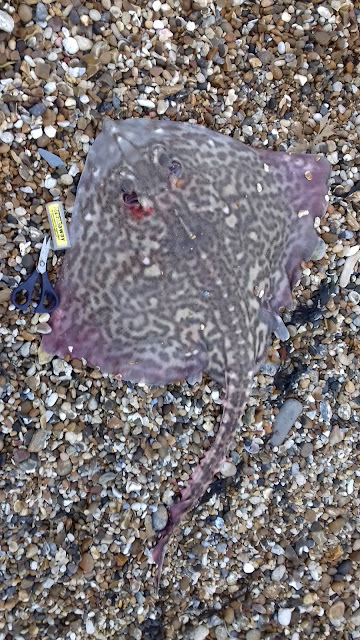 As I was unhooking the first fish the other rod sprung back and the line fell slack. Another one.

The next couple of hours they continued feeding on and off and I ended up with nine, all around 5-6lb. I came back for another go a couple of days later and had another five to 9.5lb, so plenty of fish about.

Daytime sessions much better at the moment because as soon as it's dark the whiting are on the baits before the rays get a chance.

Still a few bass in the river, mostly litluns though.

Something special about those Essex mudflats. 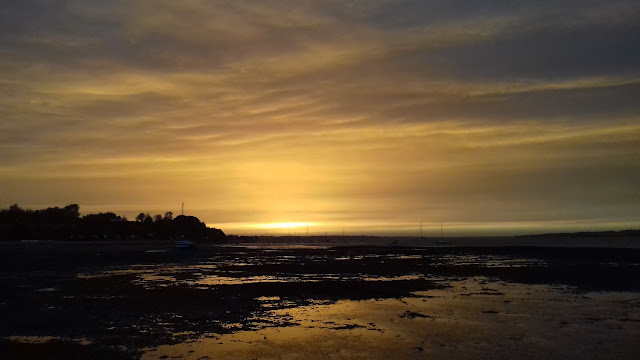 On Sunday I did the Wix Five Miler along with four hundred others. Unbelievably warm, a nice flat course and a decent time of 36.39. Then off for a meal and a few pints with Bongo and Mr and Mrs Turdster. Wunderbar. 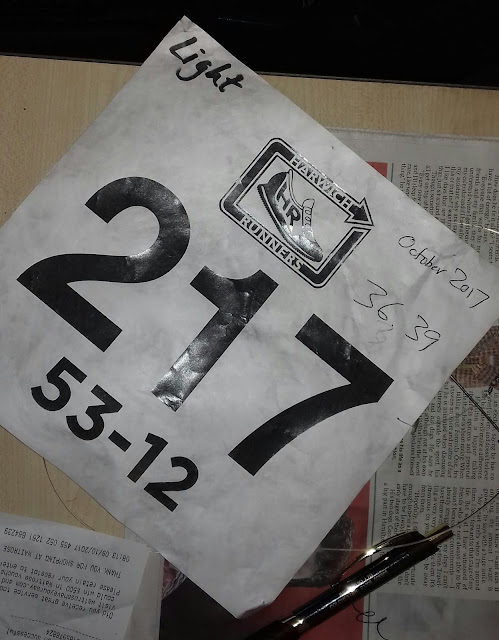 Lastly, just when you think this prick Trump can't be even more of a buffoon........ 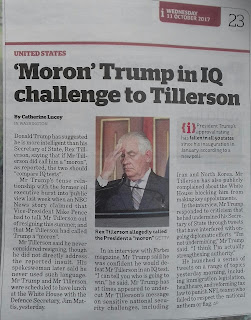 Posted by The Essex Scribbler at 12:33 4 comments:

" I would rather sit on a pumpkin and have it all to myself, than be crowded on a velvet cushion "

I headed off to the estuary bait digging, as me and Conc were off to Dorset for a couple of days fishing. Despite a piddly little tide I managed a good number of ragworm and just as low water approached I stopped digging. I had bought along the spinning rod along, as I'd hoped to have an hour after a bass or two.

The strong westerly wind had coloured up the water quite badly, but I thought I'd have a go anyway. I'd only been fishing ten minutes when the water erupted as a bass hit the surface lure. The rod hooped over and it was clear this was bigger than the little schoolies I've been having of late. After a short but spirited fight a cracking bass in pristine condition was beached.

Best one I've had this year, well over 4lb I guess. That'll do nicely. 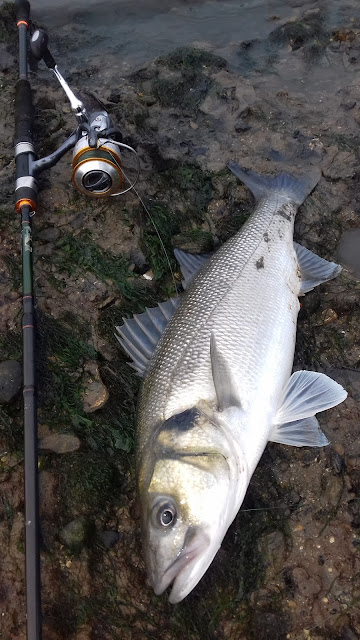 Me and Conc set off early Thursday morning. I pointed the camper towards the south west and off it chugged. We arrived at the shingle with a stiff north westerly blowing. Not perfect but fishable. We had bites from the first cast, most missed, we guessed these were black bream as they can be difficult to hook. Conc was quickly off the mark with a barbeque sized fish around the pound mark. I hooked into what I thought was a big bream, but turned out to be a smoothound.

Soon after I had my first bream, followed by the inevitable dogfish and, even worse, tiny congers. Final scores, Conc five bream including a corker of 2lb, doggies and conger. Me, two bream, two smoothies, dogs and conger.


After a half hour trudge across the shingle back to the camper we pigged out on curry and Belguim beer before crashing out.

I woke early and opened the camper door. The wind had dropped and I made the short walk over the top of the shingle bank to see that the sea had calmed right down. Lovely.

We went back to the same spot and first cast I was in to a nice bream. Then another. Lots of bites, some hit, some missed, but bites every cast anyway.

Conc was getting bites but the only ones he was making contact with were dogs. I continued to catch bream and then set the float rod up to try for the garfish. We took it in turns with the float rod, there were loads of them, great fun.

As the tide turned the bottom rods went quiet. I was still getting a few bream, but Conc remained breamless.

We were sitting in the sunshine in T shirts in October, milking the last of the warm weather for all it was worth. A beautiful day, the Isle of Portland to the east and the red cliffs of Devon to the west clearly visible in the distance. We were lucky to be there and we knew it.

Late in the day I managed a cracking plaice, a welcome surprise. 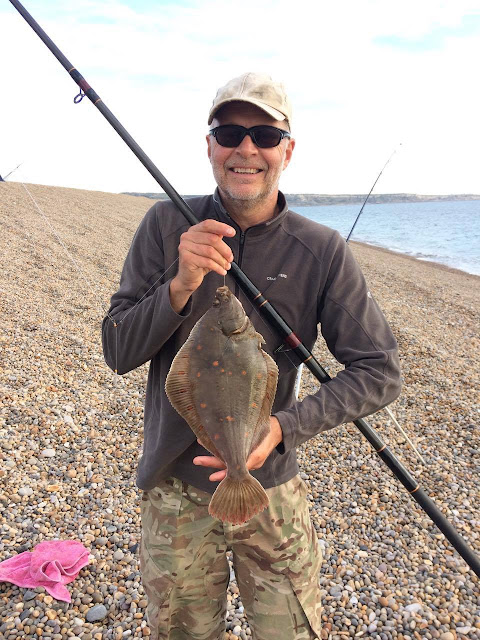 Conc ended up with one bream, nine gars and lots and lots of dogs, plus a couple of hideous tiny conger. I had eleven bream, a plaice, ten gars and a few dogs. The Concmeister took a deserved thrashing, revenge for when he hammered me 26-6 on the plaice in Brighton earlier this year. He took the piss taking well, but he would, he's a fine fellow.

A most enjoyable couple of days.
Posted by The Essex Scribbler at 12:24 4 comments:

" I believe in luck. How else can you explain the success of those you dislike "

Sunday morning I went down the river to see if the mullet were still about. Poked my head over the bridge and saw two more blokes fishing my spot and unhooking what looked like a small bass.
The mullet were a bit further upstream as usual, on the shallows, so I got my fly gear and started drifting the fly over the fish, which were very active, flashing and dashing about. After twenty minutes I had a take and felt the fish thumping. A few seconds later it was off and the air turned blue.

The fish seemed to disappear and I started walking back to the car, but stopped and had a chat with the other two blokes who were also trying for the mullet without success. They packed up and as they did I looked over the bridge and saw the fish were back. Just give it five minutes I thought.

On the second cast the line pulled tight and as I pulled the hook home a big mullet rocketed off at high speed, the fly line zipping through my fingers as the fish headed for the bridge supports. Luckily it turned and shot off upstream. I had absolutely no control over it, but as the fish came close to the bank I managed to beach it on the mud. A real beast of a mullet, victory from the jaws of defeat. Well pleased again. 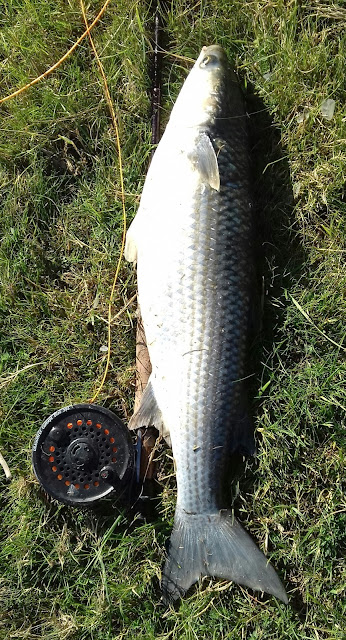 After all that commotion, the rest of the fish really had moved on, so I thought I'd have a look at another stretch a minute or two away. I crept down the steep bank and on to the mud and was greeted with the sight of dozens of mullet splashing and moving across the shallows. Definitely the biggest shoal I've seen this year. There were bloody loads of them. It was a dead cert I'd get another.

Of course, I didn't. I couldn't get a touch.

One more cast and as soon as the line hit the water a fish launched itself at the fly. I tightened into it and as I did so, the fish tailwalked and repeatedly jumped out of the water. This continued as the it  came closer to me. It had spots. Not a mullet, a beautifully marked sea trout, my first ever. 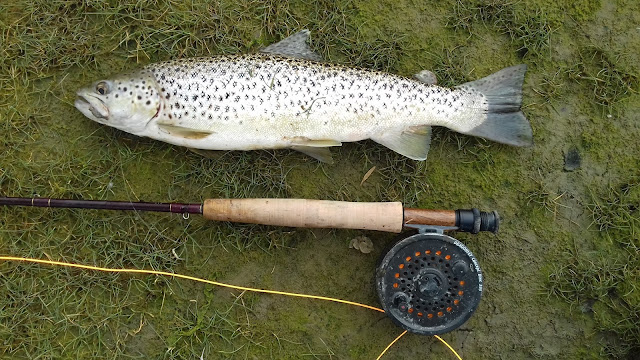