After missing out on a weekend in Yorkshire walking and checking out the course in March, due to bad weather, myself and The Manc Midgit re arranged the trip for this weekend.

However, The Silent Assassin had bigger things on his mind, running the London Marathon, so was yet again absent. Update on how he got on to follow when we have news from the front.

Norbert Slowgrove was also on a big weekend away, thanks to The Sun newspaper's promotion of a two nights in Caister for a mere £8.50 per night per person per night ( Terms and Conditions apply). Free entertainment in the form of a "Best Elvis Impersonator" thrown in too. Too good to turn down. BARGAIN !

Anyway, luckily the re arranged trip coincided with some beautiful spring weather, with mild temperatures and clear blue skies. We stayed at a pub in Grassington, had a few beers in the evening and were up before 7 in the morning, eager for an early start. Only problem was that breakfast was served between 9 and 10. What ! That's halfway through the morning ! So we left without breakfast. Don't worry, said I, we'll have breakfast at a cafe in Conistone, about three miles into our walk.

After a minor detour round Grassington, due to a bit of, erm, careless map reading, we set off north, with the early morning frost being burnt off by the strengthening sun. I insisted on taking loads of photos, which caused much whining and whinging throughout the day from TMM.

It's strange, no matter how many shots I take, I always end of looking like a skinny, rubber faced, middle aged man, which is obviously not what I really am. The camera never lies ? What a load of bollocks ! 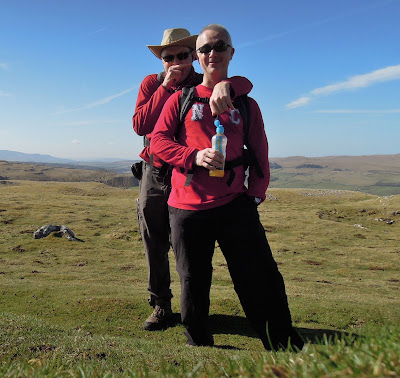 After about an hour we arrived in Conistone. We saw some blokes getting ready to go canoeing and asked them where the cafe was. "Kettlewell" came the reply. "About 5 miles away". Great. I was bloody starving, so a near black banana about 3 weeks old had to suffice until we reached Kettlewell.

We started climbing a steep, narrow pass, known as Conistone Dib. TMM spotted a dying rabbit, which was twitching and shaking. A man with two small children, about 5 and 8, were behind us, so TMM stood in front of said rabbit and shuffled about, trying to stop the kids catching site of it. It was like a scene from Monty Python. With the man a few yards away, TMM says, in hushed tones, without moving his lips "Dying rabbit....dying rabbit".  "What?" the man says. "Dying rabbit, dying rabbit" says TMM. Man looks at him as if he's a lunatic and walks on. One of the kids looks at the animal and just says "Eerrh, look at that rabbit" and walks off unconcerned. That's what happens when an ignorant townie goes to the country. 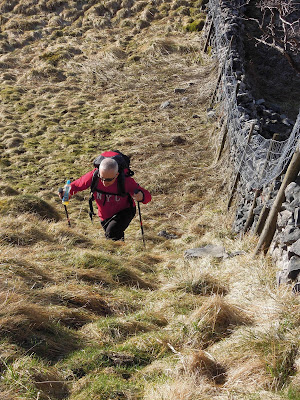 We reached the top of the pass and carried on over some beautiful rolling countryside, with me pointing out, in my most pompous and condescending manner (I can't help it, it's part of who I am), various different birds and animals. Though to be fair, I was making half of it up, because TMM didn't have a clue. We did, however, spot a Yorkshire Spider Monkey , see photo below. 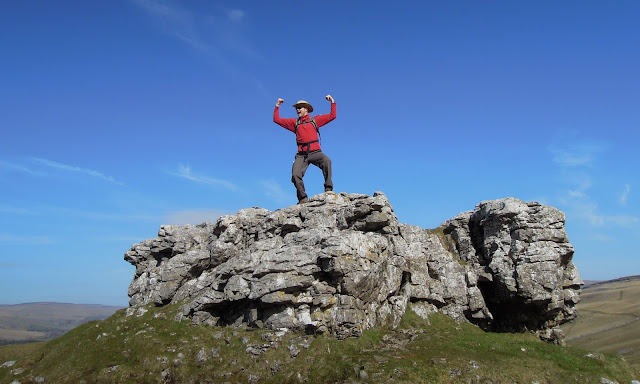 Eventually, three and a half hours after leaving Grassington, we walked into Kettlewell and sat outside a cafe, ready to tuck into breakfast. I recognised a bloke sitting near us. "That's Bill Webster" I said (OK, I sometimes watch Corrie. Alright ?). "Who?" says TMM. And him being a northerner too.

A local woman pipes up. "Are you Bill Webster ?". "Yes" says.....well, Bill Webster. For those of you not Corrie watchers, I should point out that Bill Webster is TV Dad of Kevin Webster, who, in real life, is facing sexual assault charges. "What's your Kevin been up to? " says the woman. "I've no idea" says Bill. "Well you bloody well should have! " replies the woman. "I blame the the parents ! " she says, seemingly unaware that Bill is merely his fictional Dad.

After breakfast, we headed up towards Whernside, the highest peak in Yorkshire, standing at 2415 feet (I hope you're taking notes). It didn't look far from the village, but it  took a good amount of  time and effort to get to the top, where it was considerably windier and colder than in the village. Although it was the third week in April there was still a ridge of snow at the top. 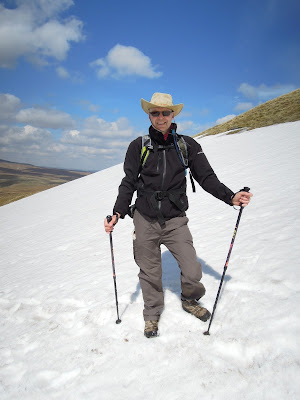 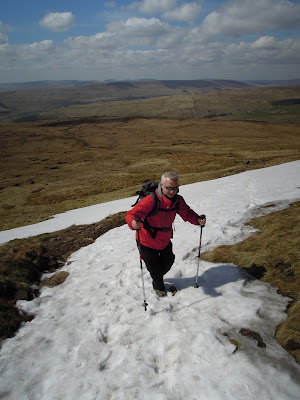 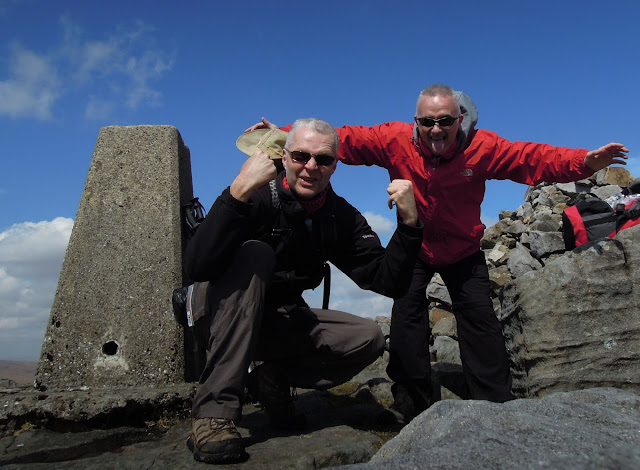 We walked along the top of ridge back in the direction of Grassington, over some very rough, boggy ground where my Gore Tex  lined waterproof boots proved not to be. The views, though, were truly fantastic and well worth all the effort to get up there in the first place. 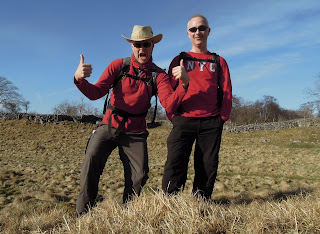 We scrambled down a very steep drop onto a firmer footpath and continued without incident, enjoying the sun and talking guff,  until we reached Grassington about 9 hours and 19 miles after we first set out.

Posted by The Essex Scribbler at 12:58 No comments:

The Manc Midgit has been suffering with injuries recently, so last weekend he decided to go dog racing instead. Don't know if he did any good..... 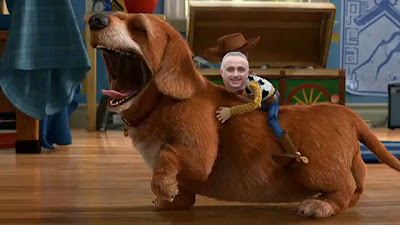 Posted by The Essex Scribbler at 05:04 No comments:

Out on April Fools Day with Norbert Slowgrove for the longest training walk so far. We invited The FISH, Ruddski and The Silent Assassin, but to no avail.

The FISH said he'd lost his phone, so never got the message and Ruddski said Lady Dawnie had already got his whole weekend planned. I've only recently realised that he does exactly what he's told at home and the Effin' and Blinding Man of the People character only exists when he's at work.

By the way, The Silent Assassin DOES exist, He's not a figment of my imagination. It's just that he's training for the London Marathon at the moment. I always ask him if he wants to join us for a walk and although he's to polite to say it, you can see that he's thinking "You silly old twat, you think I need to train with you and Norbert when I'm running 26 smegging miles in a couple of weeks ?"

The weather started off grey and cloudy with that poxy, biting north easterly wind that I loathe.

We started at Great Bromley church, set off through the back lanes to the edge of Lawford, across the fields to Flatford Mill, on to East Bergholt, then over no man's land for several miles. By this time I was starving, so tucked in to the smoked salmon and cream cheese sandwiches, with a few mini chocolate Easter eggs for good measure, stolen from Jamie's rucksack. We reached Bentley (Suffolk) via Holly Wood and Dodnash Wood, where the sun managed to struggle (and stay) out. From here we headed back via East End, over the river at Brantham and on to Manningtree, where we were going to have a break.

By this time we'd done about 13/14 miles and my only interest was that the cafe MUST be open as I was desperate for a hot drink. Luckily it was and we had a drink and snack before continuing on to Mistley and Bradfield. 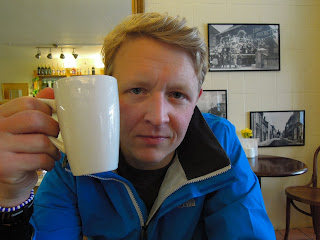 At Bradfield we took a path along the top of Mistley, by the rugby club and through Furze Hill wood, where we stopped to pose for a photo with Old Knobbley, an oak tree that's reckoned to be 800 years old ( bit of local history for you, good solid facts. I'm not making this up you know ) .


That's me with Old Knobbley, that is 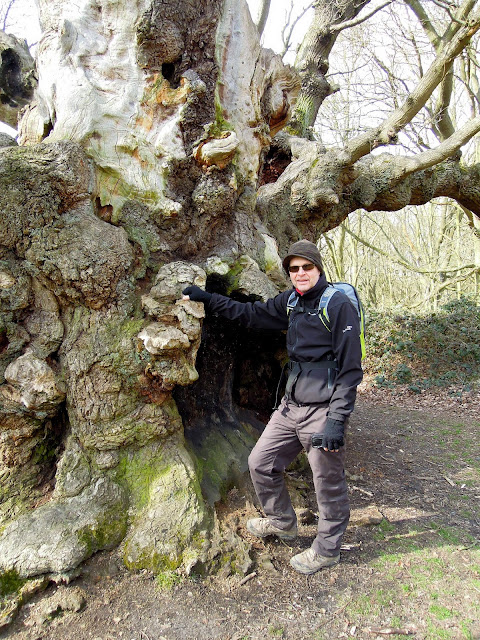 Below - The gayest man in Essex 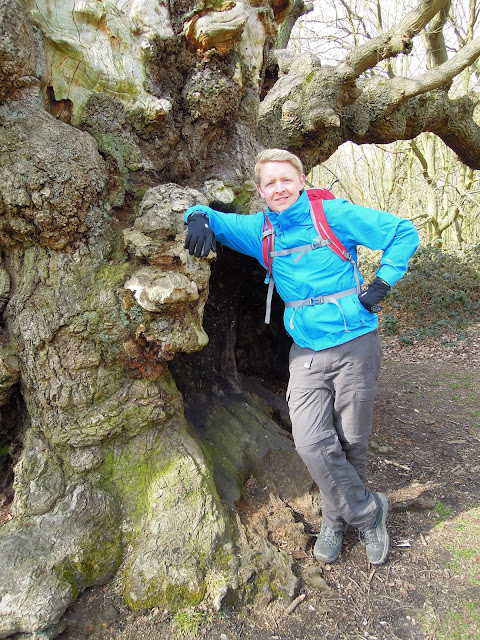 By this time the feet were starting to ache a bit, so we changed from walking boots to trainers for the last few miles, which made it a bit more comfortable, as we followed the lanes back to via Little Bromley to Great Bromley church.

A total of 23 miles in 6 hours 10 minutes actual walking. With stops, about 7 hours.

Posted by The Essex Scribbler at 12:25 No comments: