You're Fishing For What ?

Well, it was gudgeon and ruffe for a while. And good fun it was too. When fishing with the light float gear on the Grand Union and the Kennet and Avon canal I had many species, including lots of silver bream. 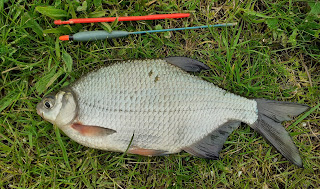 Not skinny, flat skimmer bream but lovely not very snotty at all silver bream.

Really pretty fish, their big eyes, red pectoral and caudal fins and distinct shape making it possible to clearly identify them from the usual bronze bream.

At first I thought very light gear and maggots was the way to get them and though it certainly worked, bread flake and small cubes of luncheon meat were also very effective.

I had them to an estimated pound plus. Yes, I should have weighed them, I will next time. 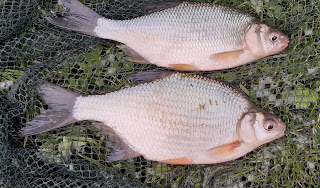 See the top fish ? Hybrid I think, proper silver bream below it. 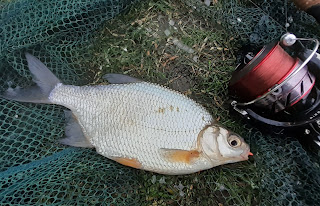 The fish below is a "almost but not quite" I think. 90 per cent silver ? Who knows ? 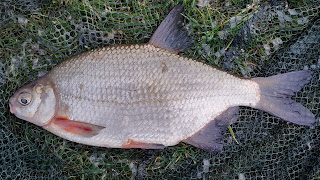 And this last one. A definite hybrid, but an interesting looking fish. 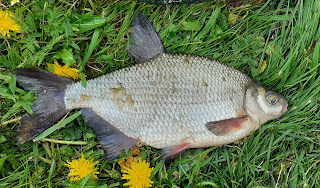 I enjoyed fishing for and catching them. Again, something a bit different.

Posted by The Essex Scribbler at 14:24 3 comments:

As I mentioned in a previous post, on my day with The Zandermeister, Mark Bevan, I learnt lots of stuff that would have taken ages to discover by myself.

But I did catch enough to come up with a few thoughts. But that's all they are, I'm certainly not trying to give anyone advice based on a couple of weeks fishing.

* Moves swims if you don't have a take or any indications after twenty minutes or so. Almost all the fish I had came within that period of casting out.

* Along the same lines, cover as much water as possible. Even if you don't know favoured areas you give yourself a better chance of finding a fish or two

* If you get a dropped run they'll quite often come back next cast for another go.

* Dusk, I mean proper dusk, wasn't very productive. Whether this was due to it being very cold or whatever I don't know, but dusk was almost always disappointing. It was much better late afternoon through to early evening. 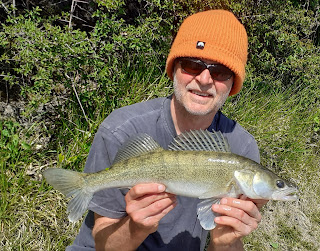 And that is about as much as my shrivelled brain can come up with. I can't wait to get back in autumn for another go.

Posted by The Essex Scribbler at 00:14 3 comments:

"Make it your habit not to be critical of small things"

Let me tell you about the species hunt. Ive never had any interest in it before,I don't know why.

However, when me, Cocksy and The Dunmow Hungry F****r put a quid up for grabs for the angler who catches the most species in 2021, i suddenly developed a huge hunger in winning wiping the floor with the pair of them. And it's been great fun so far.

I think it will take at least fifty species to win, more if I avoid work for the next few months.

But let's talk about the spring. I've just had a momth in the camper, fishing the Grand Union  and Kennet and Avon canal and one or two other places. Well, not only fishing but I did have a dabble most days.

My no 1 target was ruffe and gudgeon, not so easy to locate in many waters these days. I was assured by a contact that the town stretch in Devizes the place to catch them. Or ruffe anyway.

First day I picked a spot and immediately started catching, decent perch, roach, hybrids, skimmers, better bream....but no ruffe. I persevered and ended up with five ruffe and was ridiculously chuffed to have caught them. No gudgeon though. 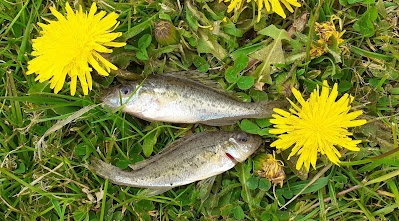 I cycled back to the campsite, probably five miles along the canal, a stretch full of fish, but not known for gudgeon. I stopped at several places for ten or twenty minutes, catching a variety of species at each spot.
Last swim looked perfect, with loose reeds close to the bank. I put a few maggots in and lowered the float inches out from the bank and a minute later a gudgeon hit the bank. And I let out a ludicrously loud "Yeeeeeees " !

After I started fishing ultra close in I caught gudgeon in loads of swims, but anything further out resulted in plenty of fish but no gudgeon.

I really did get as big a kick catching those ruffe and gudgeon as I do catching much, much bigger fish. More so in fact.

Posted by The Essex Scribbler at 14:48 2 comments:

A Tale of Two Zander

Back blogging now, you'll be fed up with the explosion of creativity very quickly.

There is undoubtedly an element of luck or chance in fishing, but some people are consistently more “lucky” than others. Which obviously tells you it’s not really luck. You make your own luck, good or bad.

I’ve spent a bit of time recently fishing the Grand Union Canal for zander and have had some pleasing results.

Firstly, thanks to Mark Bevan-Powell, local zander fisherman and all round good bloke who has helped in putting me on good areas. More than that, he took me fishing one day and passed on all manner of tips and hints. And to top it off, he hates Man Utd too.

Anyway, I’d spent a couple of hours lure fishing, only had one small fish, no other takes and had reached the stage when I was going through the motions. Although I’d been put on the stretch, it’s about three miles between locks so didn’t know the exact swims or areas.

I spotted a dead roach floating mid stream. That’ll do. I cast over it with the lure several times and eventually fished it out, cut it in half, cobbled together a deadbait rig, cast it out and sat back and relaxed.

I didn’t relax for long because about two minutes later the float bobbed and slid away. I wound into the fish on the ridiculously light five gram lure rod, which folded over. A long flash of silver and I saw what looked like a decent pike, getting towards double figures. After keeping deep it came up and thrashed on the surface, not a pike, a zander and a good one too. “ Don’t come off. don’t come off ”. It didn’t and there it lay in the net. No scales but no less than 8lb I reckoned. Was I pleased ? Just a bit.

Now, you could say that was a lucky capture. I didn’t pick the swim, I cast out where I found the roach, pure chance. But, there was also a bit of opportunism at work, if I hadn’t bothered to hook the roach out and change methods I wouldn’t have caught it. 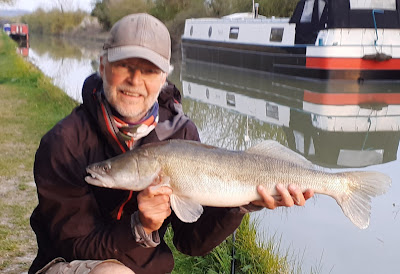 I was fishing an area that looked good, but I’d not previously had any indication of fish present. I was speaking to Mick Newey, fellow blogger, who’d come to fish with his mate for the evening. Whilst we were speaking, the float gently bobbed and slowly moved off. I wound down and a small zander came to the net. Mick wandered off, I re cast to the same spot and within a few minutes I was in again. Another small one.

I again re cast to the same spot, but after twenty minutes or so it was time for a move, just sixty or seventy yards along the bank. I picked up the other rod and being a lazy git, didn’t bother to secure the hook in the rod ring, so the bait was swinging around, ready to tangle anything in it’s way, which it did….. the other rod, that was still out there fishing. Excellent.

The braid and hook had gone round the other line about a million times, an unholy mess. Braid does my head in sometimes. Well, quite often actually.

I stood there muttering and cursing, trying to untangle it all for three or four minutes when I felt a hard pull on the braid. I don’t believe it, a bloody take whilst I’m in a mess. There was no way I could strike or pull in to the fish until I’d sorted it out.

A minute later with it all resolved I wound into the fish and the rod hooped round in a satisfying curve. It felt like a decent one and it was, an ounce short of 7lb. Luckily the fish was not deep hooked, the circle hook nicely secured in the scissors. Again, well pleased.

So, luck ? Yes, if I hadn’t tangled the other rod due to my cretinous incompetence, I would have wound the rod in and moved swims and it’s highly likely I wouldn’t have caught that fish.

Serendipidy ( spellcheck please ) is the word to describe it I think. Whatever, you can’t beat a bit of good old fashioned “luck”.

Posted by The Essex Scribbler at 13:38 3 comments: