Great gig last week at Newmarket race course. The mighty James, first time I've seen them. What a band, so many chuuuuunes. Goozgog left the confines of Capel and joined me and was as equally enthusiastic as me. We enjoyed the, erm, people watching, too.

So many singalong numbers, what a voice Tim Booth has got. The old classics mixed in with ( very good ) new stuff. Best gig for ages.

I've been mulleting again. By that I mean I've been fishing for them, not catching them. I knew I had it too easy last week.

I've been trying to find out where they are at different stages of the tide. At the moment all I know is where they are around low water. It appears they spread out a bit as the tide floods. Going again tomorrow, I'm due another one.

What a beautiful evening it was yesterday, the wind dropped away leaving blue sky and scattered cloud. Fantastic. 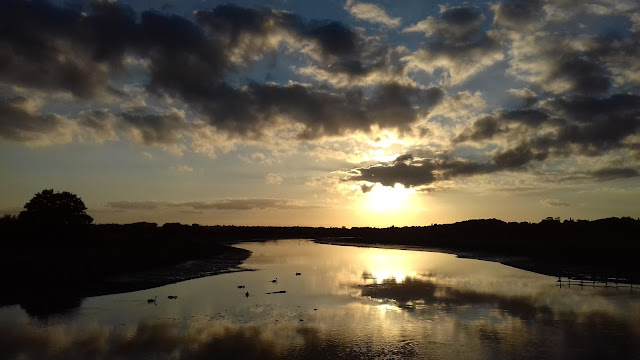 There were loads of fish about, big ones, small ones and some as big as....well, you get the picture, Couldn't catch the buggers though. 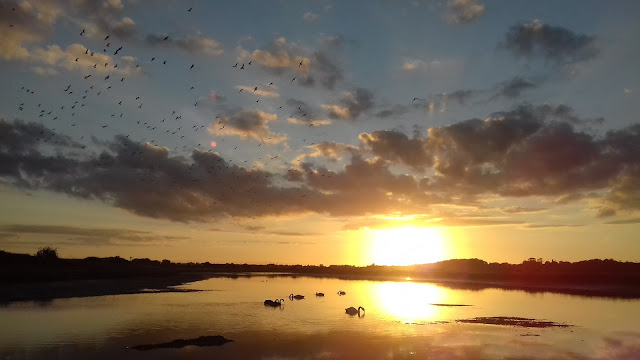 Corking photos, even if I say so myself. 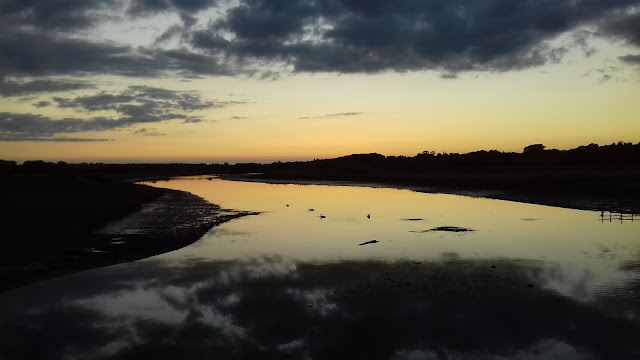 Been listening to " Antics " by Interpol recently, which has been played relentlessly on the car CD player. A real " grower " and my current fave. Check it out, pop pickers.

Finally, a word for The Mighty Turdster, who caught himself a stonking 9lb bass from  his own boat last week. Good work Turd. 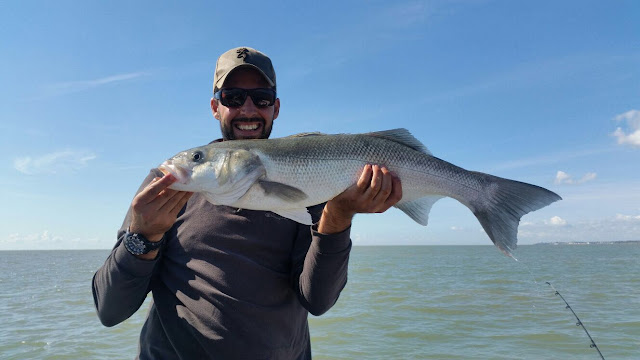 Posted by The Essex Scribbler at 12:54 5 comments:

I sent a text to The Mighty Turdster telling him of my success on the fly. He replied, telling me to come down for a go after the mullet in his marina, which were "uncatchable". So, the next day we set off with a bucket of bread mash ready for another assault on the mullet.

There were fish spread out around the marina, many under the boats and others milling about around the weed. I picked a spot where we could observe what was going on and started to feed bits of bread mash. The fish were swimming past it, not frightened but not showing any interest either. After about an hour, more fish started darting around the mash and seconds later they were on it, feeding in a bit of a frenzy.

TMT had first cast and within seconds the float sank and he was into his first mullet. It looked a decent fish too, but after a few minutes the hook pulled out.

We continued to feed the spot and surprisingly the commotion hadn't spooked the shoal. Another cast and he was in again, this time the hook held and TMT had his first ever mullet. 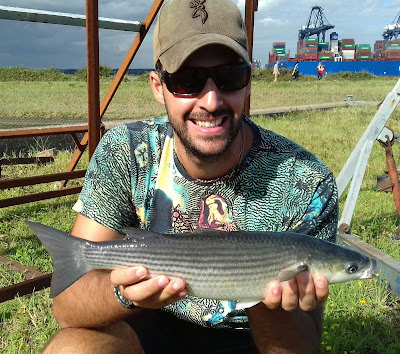 My turn on the rod next and luckily we spotted a decent fish well away from the shoal devouring every bit of bread in it's path. I lowered the bait in and seconds later the rod hooped over as the mullet steamed off in the direction of the moored boats. The tackle held and a fish getting on for 5lb slid over the net. Lovely. 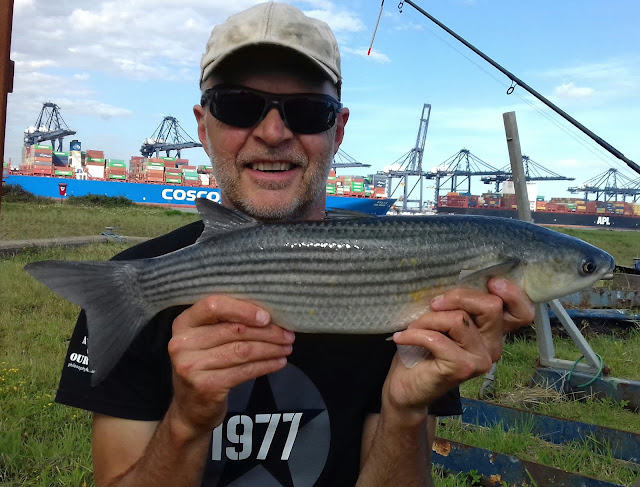 As we walked back to the car we spotted another big mullet under one of the boats. TMT cast a bit of bread hopefully in it's direction and it immediately swam towards the bait and engulfed it. This fish didn't tear off, but did battle for well over five minutes until we managed to net it. A really nice fish to end the day. 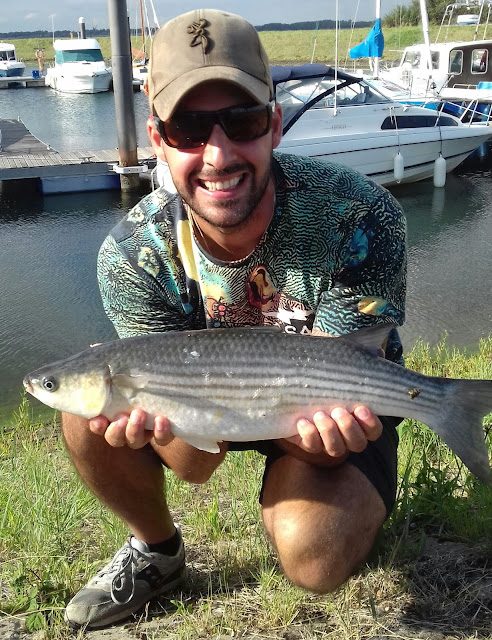 When you're on a roll, milk it, because you never know when your luck will dry up. So with that in mind the next day I grabbed an hour on the fly rod back on the river.

Conditions were more pleasant than the other day, the wind being much lighter. However, after a blank couple of hours I was losing confidence. Not a sniff. I went to lift the fly out the water and found myself attached to a big mullet that bow waved off the shallows into the main flow where it maintained it's position for several minutes.

The brook rod was bent double but eventually the constant pressure told and a real pig of a fish was beached. 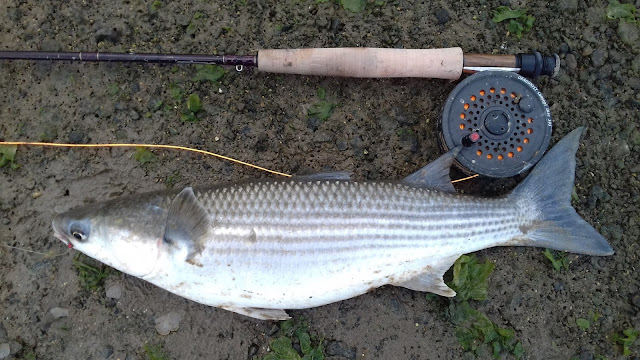 Look at that fat bugger. Well pleased with that. This weekend I'll attempt to continue to ride the wave of good luck. Wunderbar.

Posted by The Essex Scribbler at 08:00 4 comments:

" Life's too short to try and catch mullet "
Anon

After last week's carp-roach-bream escapades I said to Conc, Norfolk Bob and anyone that would listen that a mullet on the fly was the target for August.

Make yourself a cup of tea and settle down, I'm going to milk this.

I'd been watching these mullet for ages. Last year I said I would do it but never did. I sorted out a nice five weight fly rod and some recommended mullet flies and set off for the river. A look over the bridge confirmed there were plenty of fish about.

I started off with as much confidence as it's possible to have, whilst trying for the hardest fish in  the sea to catch. On a fly. An hour or so with no action and I changed the fly. out of hope rather than any great plan.

First cast, I had a take. I had a take, fuck me I had a take ! I re cast and immediately struck into a fish, which, in just a few inches of water, immediately tail walked before zipping off at high speed with the fly line ripping through my fingers. I couldn't believe it. 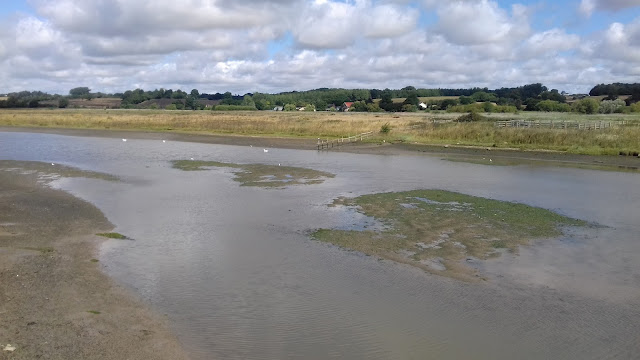 After a good five minutes or more I beached a lovely fish of maybe 3lb. Chuffed, I certainly was. Amazing how a silly wet fish can nget your legs a wobblin' after forty years. 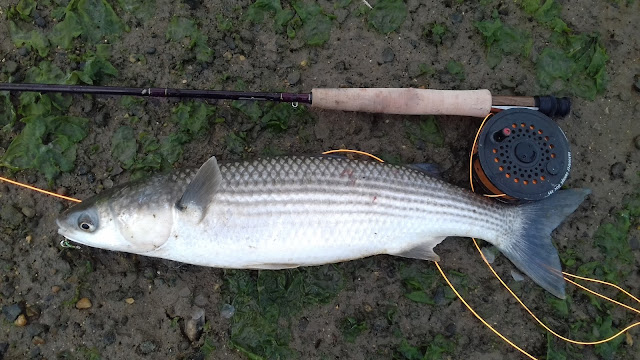 About five minutes later I was in again, this time after jumping several times the hook pulled. No matter, I was getting bites. Shortly afterwards I hooked a bigger fish that seemed to take ages to get in on the light gear, powering off again and again before finally being beaten. A cracking fish of around 4lb this time. 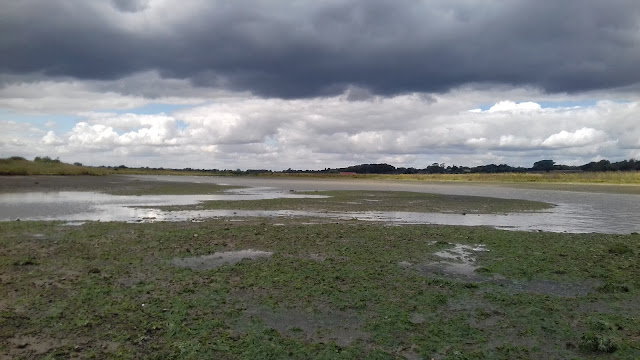 What a great start to the mullet campaign. I was texting all and sundry boasting about  a fookin' mullet on the fly. Well, telling your mates is half the fun isn't it. The Norfolk boys were on the internet buying fly gear that very evening. 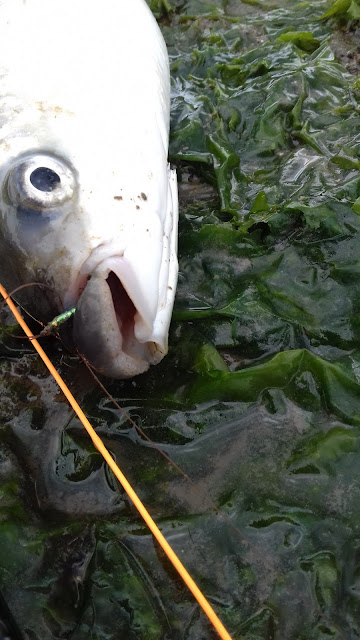 After that success I'd obviously got the bug, as I can be a bit of a keenie sometimes and plans were already being made to get back down there again. 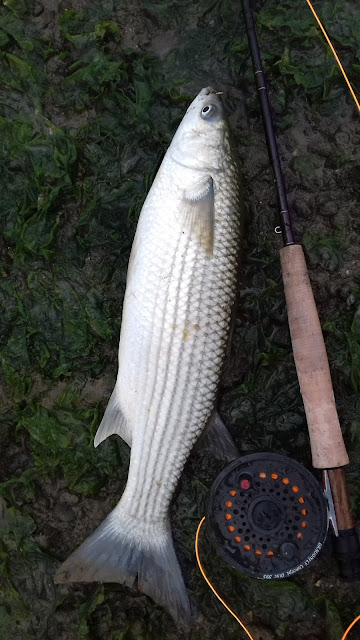 Posted by The Essex Scribbler at 23:45 5 comments: