Smelling The Flowers Along The Way

A walk early this morning along the Grange, the lovely late summer smell of the the damp, musty, woods in my nostrils. The overnight rain had passed, so I was looking for and expecting a few mushrooms, but I surprisingly found nothing. In a few days, perhaps ?
Later, a  bike ride round the tiny lanes towards Manningtree. Hedges now full of ripening blackberries,hips, haws and elderberries. And totally carless, Yes, in good old Essex. In a Britain full of them. 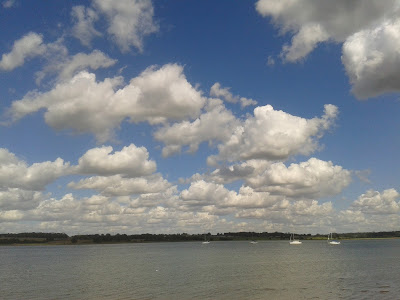 Cloudtastic day, eh ? Warm too, so I had a quick session in the evening at my bass spot, which was, for the first time this year, devoid of bass. Still, plenty of time yet, and I'm expecting October and November to produce the best fishing of the year ( and maybe the best fishing for years....we'll see ) 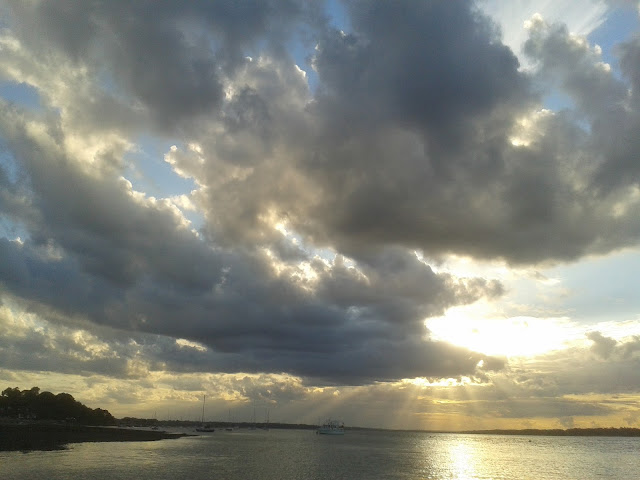 Still, a gorgeous evening and end to a beautiful late summer's day.

Posted by The Essex Scribbler at 00:50 2 comments:

Hats Off to the Boy Shakespere

I was googling "scepter'd isle" the other day, can't remember why, one thing leads to another on the interweb ( stop sniggering Baines ) and came across this.
If I was a formally educated man, I'd be familiar with it, but I went to Brightlingsea Comprehensive in the 70's, where learning to read and write was classed as a success.
Anyway, I reckon that bard bloke ain't half bad sometimes.
I nicked one of the lines for a blog post title too.


This royal throne of kings, this scepter'd isle,
This earth of majesty, this seat of Mars,
This other Eden, demi-paradise,
This fortress built by Nature for herself
Against infection and the hand of war,
This happy breed of men, this little world,
This precious stone set in the silver sea,
Which serves it in the office of a wall,
Or as a moat defensive to a house,
Against the envy of less happier lands,
This blessed plot, this earth, this realm, this England

From Richard II, Act 2 (Shakespeare)
Posted by The Essex Scribbler at 00:12 2 comments:

For your delictation and perusal, I give you my latest cultural recommendations. The comments of BB and TT are especially welcome.

My mate Tapas Nigel introduced me to this, he said it was "awful shit" but he loves it. Me too.
Love the photos from the sixties on this video and what a fantastic song. Judas Priest do a good version too. Currently my favourite song ever. Till my next discovery.

Marc Riley on 6Music had a great session from Alternative TV last week. Sound better than they did in the old days in the punk wars. Listen here...

Riley has the best show bar none on radio at the moment.

Currently reading "As I walked Out Through Spain in Search of Laurie Lee" by P.D.Murphy. An interesting read of a bloke going through his own crisis, whilst tracing the steps of Laurie Lee's own journey through Spain during the civil war in the 30s.

The Laurie Lee book itself is one of my favourite ever and this is good too.

Prior to that, I'd raced through a couple of Tony Parsons novels, "Men from the Boys" and "Starting Over". Yes, they're all similar, but good page turners and he's about the best in that genre I think.

Along the same lines, David Nichols "Us" was good in a....I can't say it...."chick lit" kind of way. Bit different to my normal Hitler/Stalin/WW2 stuff, but a great yarn anyway.

So, let's have some feedback and some recommendations from everybody.

Posted by The Essex Scribbler at 08:27 5 comments:

Rain in the Essex Desert

Early morning bassing beneath an angry sky. One keeper in the bag before the rain was unleashed. 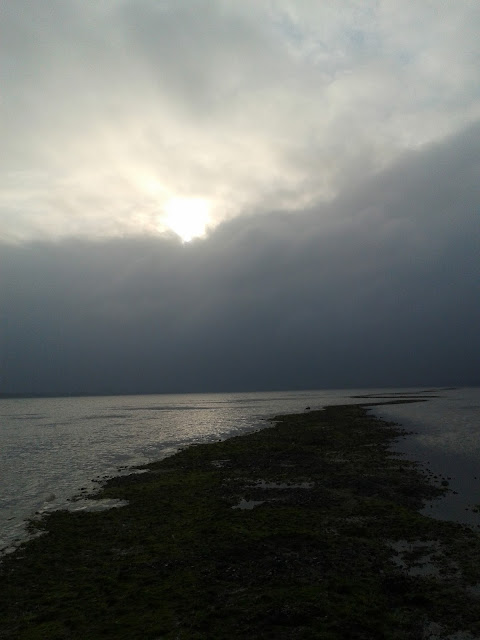 North Essex, officially the driest part of the country. But not today. 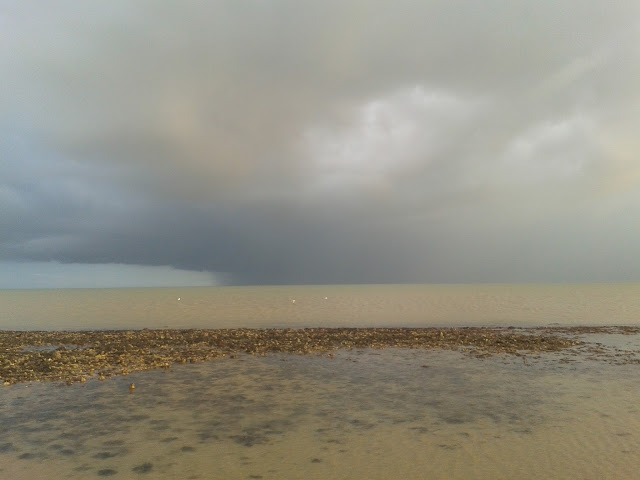 Posted by The Essex Scribbler at 10:13 No comments:

Where The Sea Meets The Sky

A dawn session on the river. A calm, humid, misty morning, the silence broken only by the distant calls of oystercatchers and redshanks.
First chuck right on low water and the ragworm was hammered within a few seconds and a furious bass crashed and splashed through the weed before hitting the shore less than a minute after casting out.
The action lasted for an hour, resulting in three decent bass and a surprise wrasse. What a great spot this is. 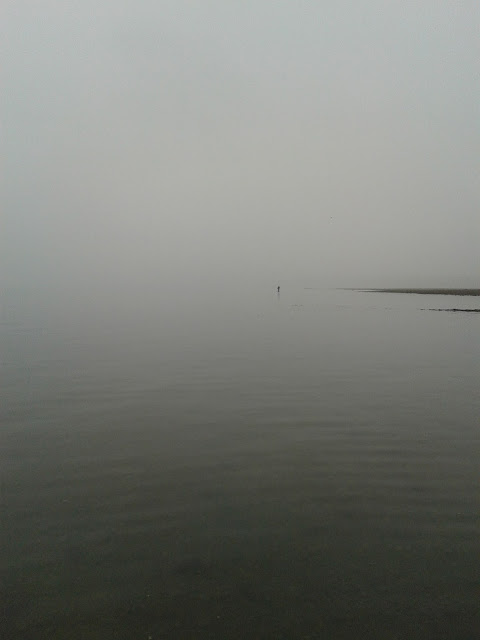 Posted by The Essex Scribbler at 01:18 8 comments:

This Precious Stone, Set In The Silver Sea

With the forecast giving fine weather for the week, I set off for Dorset at dawn, intent on a bit of coastal hiking and fishing. By eight I was in Wareham, tucking into a great breakfast at the "Five and Dime" cafe.
I then walked the coast path from  Kimmeridge to Lulworth. Some of the hills were ridiculously steep, especially the ascent west from Worborrow. But what views. 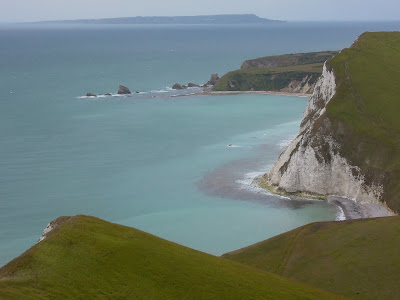 I checked out a few rock marks, it looked fantastic, but where do you start with all this great looking ground ? I had a fish here and there but just had a few smallish wrasse. 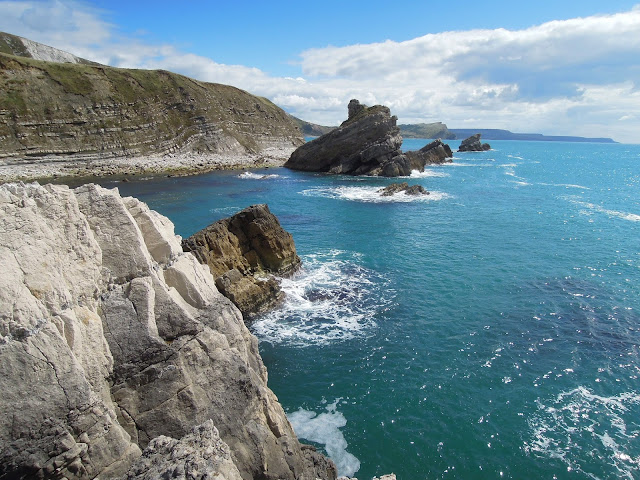 Away from the access points there were very few people about, despite it being the kid's holidays. At Lulworth, however, hundreds of lemmings milled around without ever getting more than five minutes from the car park. That's what I like to see.
I took the inland route back and tucked in to fish and chips and a damn fine bottle of Cote Du Rhone in the evening. What a great day. 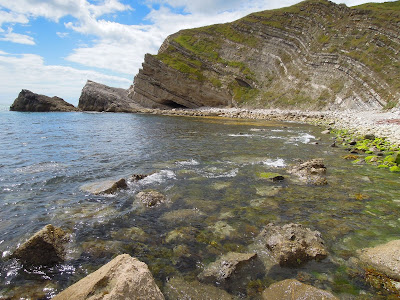 More wrassing the next day, but more of the same, a few fish here and there. Mediocre fishing, but frankly who gives a damn in such fantastic surroundings ? That's what you're meant to say isn't it ? In the evening I had a walk around Arne and enjoyed some ( yes, more) great views of Poole harbour.

Thursday I walked the full Portland circuit. A strange, but very interesting place. Some parts extremely grim, one estate reminding me of the images we used to see in the bad old days of Belfast Falls Road. Nice.
On another part of the route, the coastal path takes you past a prison, complete with high walls and razor wire on one side and amazing clifftop scenery on the other. Well worth a visit, the place is a real "one off". 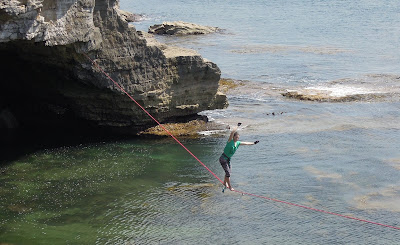 Next day I had a great walk along South Dorst Ridgeway, high above Chesil beach and around Abbotsbury and Bexington. At one stage I could see the Purbecks to the east, Devon to the west and Portand straight in front of me. Extraordinary views.
I completed this walk in double quick time, because I'd parked at the beach, ready for a mackeral fishing session in the evening, and being a bit of a saddo I was ludicrously excited at the prospect. 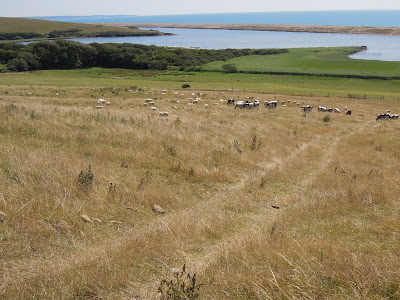 A large quantity of ice was obtained and put in a big cool box, ready to take a load of mackeral home and in pristine condition. Hopefully.
I was lucky, conditions were perfect. For mackeral and me. Calm, sunny, warm. Beautiful.
I loved it, it was like being a kid again, catching them three, four, five at a time.
There were huge, black clouds of whitebait being driven into the shingle by ravenous shoals of mackeral. The water erupted as the mackie attacked from below, with terns joining in, diving in on the whitebait. After several attacks, the shingle was littered with fry that had beached themselves trying to escape. It was like an English version of Attenborough's "Life On Earth". An incredible sight.
Two little kids were fishing with their Dad next to me. They were struggling to cast and I really hoped they'd catch a few, but doubted that they'd be able to get out far enough. As I watched them, to their left a huge shoal of mackeral attacked the fry on the surface. I shouted out and pointed and the whole family ran along the beach.
One of the kids cast out not more than five yards and pulled a string of makkie in, jumping up and down in excitement. Great to see.
Unfortunately, I filled my coolbox all too quickly and reluctantly trudged off the beach, heading off home, stopping only for a cold pint of cider, a slice of "Auntie Pat's" coffee and walnut cake and the first chat I've had with Chris " Greg Davis" Howell in twenty three years.
Summer in Old Blighty, it ain't too bad.

The Fruits of Summer

A lovely evening,  so I thought I'd have an hour and see if I could catch a bass. Arrived to find I'd left the bait digging fork behind. Oh dear.
A rustle about in the car and a packet of plastic worms was found. Half hour later I had a savage take and a few minutes late a beauty of around 4lb hit the shore.
I was well pleased and not a little smug. 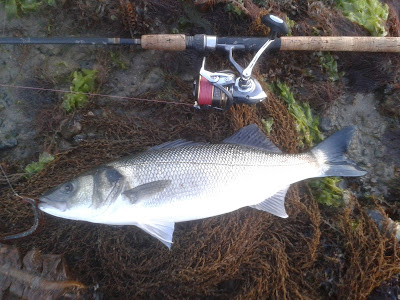 It'll save alot of messing around if these artificials prove as effective as ragworm. 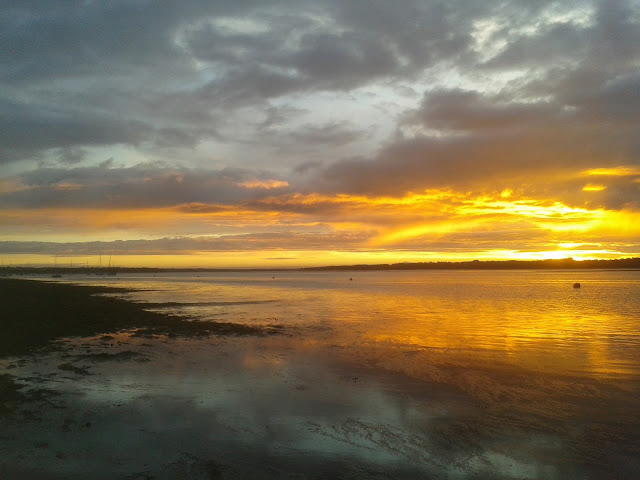 Of course,  I had to go back for another go the next day and again nailed a corker which fought like a demon. Well chuffed again. 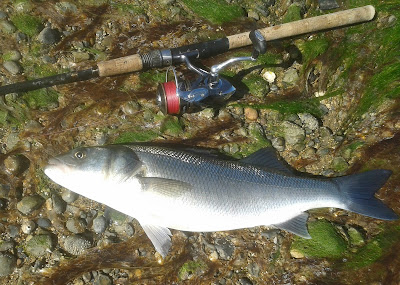 Posted by The Essex Scribbler at 07:55 4 comments: