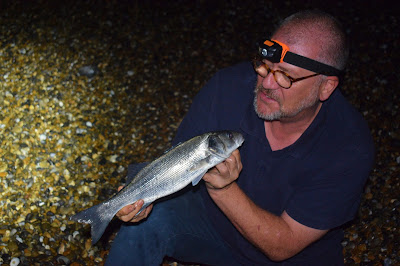 An interesting week. Hungry Boy Chris came down to try for his first mullet on Monday.

We started with trotted, twitched or popped up maddies and after half an hour watching fish ignore our offerings I suggested a change to a baited spinner.

This really can be a deadly method. The drawback is that it can put the fish down after a short period. First cast I had a follow. And the next. Then hungry Boy shouted that he was in on his second cast. A few minutes later his first ever mullet was in the net. Chuffed ? I'll say. 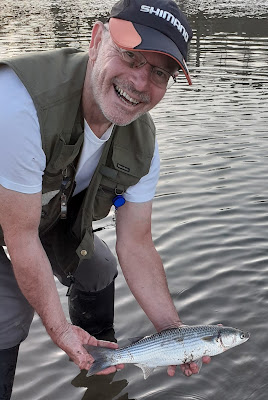 I had two takes, both of which failed to hook up, then later on lost a decent fish on the popped up rag.

Anyway job done and everyone happy.

Thursday me and Conc drove to Norfolk, a 4.5 hour round trip in pursuit of bass. Perfect tide, decent weather....very very slow fishing though.

However, the silver lining was that Bureboy Waaaak Baines joined us to try and catch his first bass and we spent the evening chatting and catching up. The tide was making the rod tips nod and Waak enquired as to whether they may be bites. No, you'll know when you have a bite.

About an hour in, his pike rod whacked over viciously as a decent bass took off at speed. As he played the fish I shone the headlamp in the margins looking for the fish. I was somewhat surprised when he wound a 3lb bass to within a foot of his rod tip, in the manner of a rank beginner !

As expected, the fish fell off into the surf, I thrashed around trying to grab it, getting soaked in the process. A wave took it away, never to be seen again. But never mind, first bass ever in the bag ( not literally unfortunately ).

Half hour later he was in again, this time properly landed and photographed.

Posted by The Essex Scribbler at 02:10