Lessons From The Guv'nor

I like to think I'm a reasonable angler, but sometimes you fish with people that give you a reality check and give you a proper lesson.

I bumped in to The Chesil General earlier this week. He's a proper gent and has been helping me out with info on his patch in Dorset.

It was a slow day, very pleasant but after a couple of hours I was biteless. The General then had his first fish, a red mullet, a fish high up on my "want list".

Next cast he had a double shot, a dab and a plaice. Hmm. Still nothing for me.

I was casting a fair old way but was dropping probably ten or twenty yards short. Sometimes a few yards makes the difference.

We both then put fresh mackerel out for a ray of some kind ( I need spotted, undulate and the much rarer blonde ). Half hour later The General leans in to a decent fish which turns out to be an 11lb blonde. Superb. 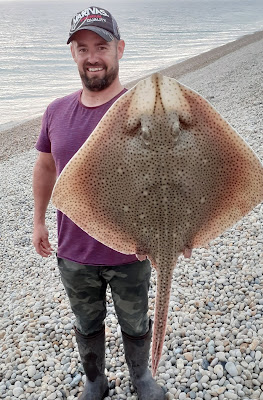 I was just a tiny bit envious. I finished up with the consolation prize of two black bream. Much better than nothing.
I picked up several ideas and it made me realise how meticulous some of the very best anglers are.
Next day I was back and had a better day. I wangled a thick lipped mullet on bread after drip feeding them for an hour. So exciting in gin clear water. Lost another better fish too. 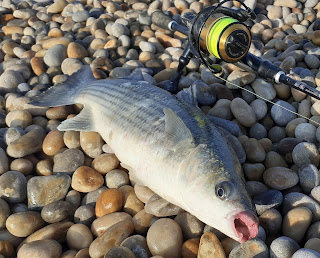 The bottom rods remained motionless until one of the tips gently nodded. Felt like a decent bream but turned out to be a rare codling. Excellent. 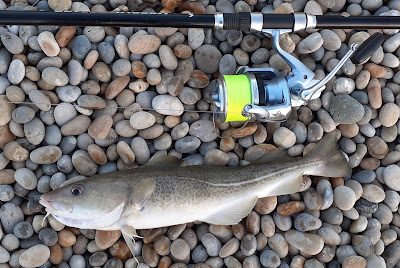 An hour late it was dark and the poxy strap congers were about in numbers. My chance of a red mullet had gone, or so I thought. A slack liner and it felt nothing like a eel. It wasn't, it was a red mullet. Well chuffed. 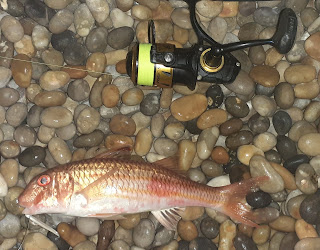 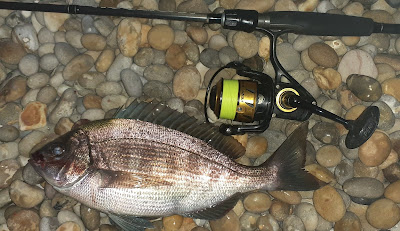 Fishing has not been easy, but there's enough around to make it interesting. I need one of those rays next.

Posted by The Essex Scribbler at 05:58