Before I went to The Best Place In The World I parked up at a place a few miles away, by a long shingle beach.

As part of the species hunt I wanted a giant goby and I'd been told of a rock pool that usually held a few. My plan was to walk to to the mark, starting along the beach before rising up and down along the coast path. The views are stunning.

Reaching the pool it looked, well, rather small. Could this be the place ? Lowering the Isome in and no reaction. Hmm. I knocked a limpet off the rock, put a small bit on and as if by magic the legendary giant goby appeared and wolfed it down . Wahooo !

It was a nine or ten mile round trip to get here, all for a little fish. I know what you're thinking, you're fecking mad. Possibly, but as Steve Peters ( The Chimp Paradox, read it ) said, " Everything is as important or unimportant as you choose to make it ". And anyway, some sad sods spend their days washing the car or doing DIY.

I then found a spot high on the cliffs and watched the England v Germany match live on the phone, shouting and swearing in glorious isolation.

On the way back I stopped off at a little cove to try for some mackerel for the barby and hopefully a sandeel for the species hunt.

A couple of casts in and a clonking great makkie hit the metal lure. Lovely. It was a beautifully still evening, the sea like the proverbial mill pond. 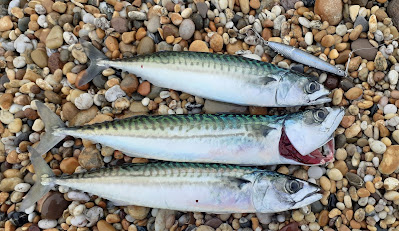 Another couple of makkie followed when the rod was almost wrenched from my grasp, it turned out to be a bass, one of two I had that night.

Putting on some micro feathers I managed to winkle out a lesser sandeel followed by a lance on a small metal lure a few casts later. Another two in the bag for the species hunt.

Another great day, a long trek but well worth it.

Posted by The Essex Scribbler at 01:29