Win Some, Lose Some

Despite it being kid's holiday season I'm back out west, in the camper in a field five minutes from the beach for a eleven quid a night. Not bad eh ?

I was aiming to increase my species count as it's coming up to prime time now.

Tides are building, high water around dusk, just about perfect. First hour passed without any bites, then a couple of knocks that resulted in a tub gurnard. Only a litlun, but another species added.

Shoals of whitebait were being harried by predators so a light spinning rod was set up and very quickly I was catching some big mackerel and the occasional scad. Lovely. 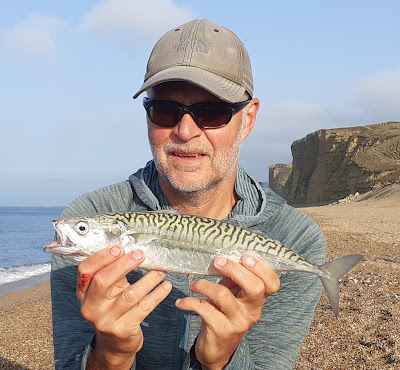 As dusk approached I started catching dogs, pout and the inevitable, hideous, slimy turds that are strap conger. After a stream of these creatures I had a different kind of bite and as I wound in I was convinced I'd got a big sole. Twenty yards out it went solid. Snagged. Bastard !

Snapped off, cheesed off, I called it a night.

Next day I was back in glorious evening sunshine on an almost deserted beach. In southern England. In August. I'm glad people don't like walking.

First cast with a huge fillet of mackerel, hoping for a undulate or small eyed ray and within a couple minutes the rod tip pulled down and sprung back. Great start, the rod hooped over in a satisfying curve with just the odd thump on the tip in typical ray style.

As the fish appeared in the surf it had changed from a ray to a bloody great bass. Well chuffed ! 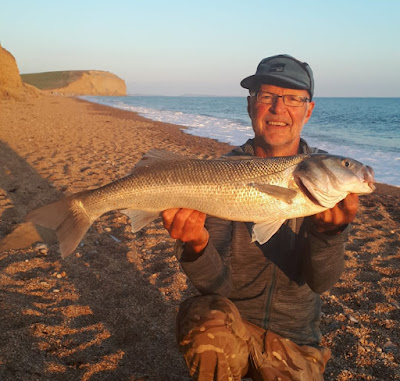 Cracking fish. I think I'd swap it for a big sole though.

Posted by The Essex Scribbler at 05:37