Far From The Madding Crowd

Well, almost. I exaggerate, but this last week in August has surprised me a bit. Yes, in the usual spots it's heaving, but walk a bit and you will avoid most of The Great British Public. Damn good show too.

I'd caught a couple of tub gurnards on the bottom rods so decided to try and catch one on the light spinning gear. I cut off a couple of sabiki type feathers and baited them with a tiny bit of mackerel and worked it various ways through the water.

I'd only been fishing a few casts when I had a hit and the first gurney was on. Pretty little fish which are great fun on light gear and very aggressive. I ended up with five all around the same size. Good fun. 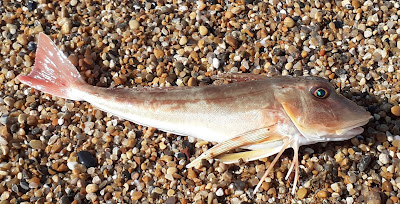 The following evening I got my sole, plus a plaice, some decent mackerel and some scad, all of which went on the barby for a fishy extravaganza.

Pics a bit crappy but was pleased to have those flatties in consecutive casts.
Next day was a mini species hunt which resulted in dozens of corkys and ballens, tompots, rock gobies, dragonet and at last a ballion's wrasse. Another one on the 2021 species list.

That's it for a while. Well, a few weeks anyway 😆

Posted by The Essex Scribbler at 01:29